Curious about the family of her eccentric great-grandmother, artist Zoe Clifford is keen to discover the truth. The quest leads her to York, and an unexpected meeting with a distant relative, sea-captain Stephen Elliott. Still smarting from his recent divorce, at first Stephen is reluctant to be involved, but an old travelling trunk full of letters and memorabilia prompts him to contact Zoe again.

Intrigued by a WW1 diary written by Liam Elliott, Stephen finds it raises more questions than answers. But as he and Zoe continue to search for the story behind it, Zoe wonders about Georgina Duncannon: who was she, and what was she to Liam?

Time slips into the past, to a peaceful family gathering in the summer of 1913, and a shocking revelation. As the secrets of two generations of star-crossed lovers come to light, the story moves from York to Australia, and from Gallipoli to the Somme, revealing the seductive power of a piercing, impossible affair.

Drawn into their own passionate affair, Stephen and Zoe are besieged by doubt; and, as Stephen joins a ship bound for the war-torn Middle East, both are faced with disturbing parallels between then and now. While Stephen navigates dangerous waters, Zoe, alone in London, is discovering the agony of distance, love and loss.

Liam’s haunting presence touches them both, but it takes a near-tragedy to make the message clear: only in the present can the past be healed…

‘Liam’s Story is really two beautifully crafted stories set in two different periods of time… linked by a family mystery, the solving of which takes us to many places, both geographically and emotionally.  We meet many family members of both eras and get to know the characters well.  In at least two gut-wrenching scenes I cried my heart out…’   Elizabeth Sandeman-Gay, reviewer.

This is a sequel to Louisa Elliott, which was inspired by the diary of a young First World War soldier from Yorkshire, and was a big success in both hardcover and paperback. On leave from his ship, Stephen Elliott meets his cousin Zoe, and they become involved a search for the Elliotts’ past.  At the centre of their researches emerges Liam, eldest son of Louisa Elliott. The story takes us through the First World War including Gallipoli and the Somme. From old letters, photos and a wartime diary, a forbidden relationship is discovered.

“A family saga full of warmth and emotion, but never mawkish, this is a splendid piece of storytelling – about the loss of innocence and a love which endures. Highly recommended.”

Continuing the tangled relationships of the British family she introduced with Louisa Elliott, Roberts again turns out a superior romantic novel written with assurance and stylistic flair, and featuring background detail of WW1 that adds gravitas and substance to the tale… Neatly interweaving past and present, Roberts keeps the reader engrossed in the emotional turmoil of both pairs of lovers. 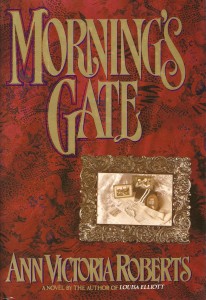 Roberts marks time with her words and keeps the reader moving along, building suspense subtly, making transitions artfully. This is sure to be a hit with those who enjoy a good long read, and appreciate a twinge of mystery. Morning’s Gate is a fulfilling fictional experience.

author of The Shell Seekers and September

“I am filled with admiration for Ann Victoria Roberts’s ability to move the reader into the past (a talent I have never been able to claim, and can’t even understand how anyone can do it.)

She has done a great job!”

Anyone who has read Louisa Elliott, the first novel by Ann Victoria Roberts, will be delighted that this talented writer has now brought out a sequel…  This blockbuster of a book is the result of Ms Roberts’ inspiration when she read the 1916 diary of an Australian soldier. Through extensive research on her part, everything relating to the First World War is based on truth. Only the modern day section is fictional.

‘Past and present become interwoven in this tale of two ages and one love, a love strong enough to overcome the horrors of the first world war and to link characters in a strange, indefinable way.

Liam’s Story is the sequel to a first novel Louisa Elliott, inspired by a diary of a soldier from Yorkshire who tastes first-hand the bitter meats of Gallipoli, Egypt, the Somme and Ypres with the Australian forces.

His horrific brutal experiences are relived in this second novel when Louisa’s son Liam discovers the tragic truth of his birth and family and heads for Australia on the rebound.

The story is seen through the eyes, at first, of Zoe, a young woman with a longing to know more about her mysterious great-grandmother, a shadowy figure who dominated her early childhood.

It is a book about relations, and the complicated, unsatisfactory relationships they provide, about 19th century taboos and a history which comes alive in present descendants of the family.

Historically the book is reasonably accurate. Details of York and wartime France are carefully researched and the up-to-date details of shipping oil from Kuwait most topical.

Writing is clear but not concise, dwelling on the physical and mental effects of a forbidden love with almost an excess of compassion. And although Mrs Roberts is a gripping writer, her novel seems inordinately long.

‘A book to take on holiday, when time stretches and there are no deadlines to meet.’ HW.

The British author of the widely acclaimed Louisa Elliott now turns her considerable talents to writing the story of Louisa’s children – beginning in the present when Zoe Clifford travels to York in search of her family’s history… Well-researched and deftly-written: a thoroughly satisfying historical novel that bridges the decades with grace and skill.