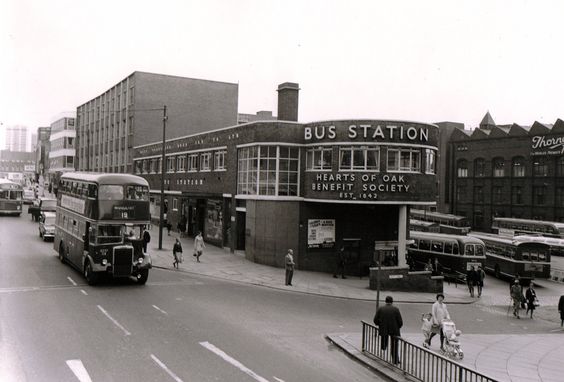 While working on a memoir, I remembered that at the age of twelve, I was allowed to travel alone to York – a journey that involved changing buses in Leeds city centre.

This was in the late 1950s, when my school and best friends were in a small town some miles away. An only child, I was sometimes bored at holiday times, and my favourite place was thirty miles and two bus-rides away. So, after discussions with Mum and Dad – and a consultation with Grandma in York – finally, I was allowed to go. Alone. I continued to do this until I left school at the age of sixteen.

Going back two generations, Grandma had left school at the age of twelve, and was sent to work at Rowntree’s chocolate factory. When I heard this, I found it shocking – but looking back, it struck me that people today would be horrified by the fact that I was allowed to travel alone at the same age, even if just occasionally. Mentioning this to my husband Peter, he reminded me that he’d changed schools at the age of thirteen. While his parents remained in West Yorkshire, he left home early each Monday morning, to take the bus to Leeds and the train to nautical school in Hull – travelling back each Friday afternoon. Between times he lodged with a family in Hull – people appointed by the local education authority.

Before long, he and his pals were saving the train fare and hitching a lift home on Friday afternoons – usually with passing lorry-drivers. The mind boggles now at the risks they were taking. But, as Peter says, they were wearing Merchant Navy uniform, and most of these drivers were regulars, transporting fresh fish from the docks to West Yorkshire towns.

If that was risky, it was nothing compared to the summer holiday jobs his headmaster recommended – no doubt to give the boys a taste of what hard work at sea could entail. So, aged 14 and upwards, Peter and his friends found themselves volunteering as deck-boys aboard fishing trawlers, leaving Hull for three-week trips to the Arctic fishing grounds.

After leaving Hull, Peter’s first sight of land was the North Cape of Norway. It was one of the reasons he’d been so keen to make our recent trip to that amazing country. He wanted to stand on that rocky outcrop – the northernmost point in Europe – and look out to sea, remembering the boy he’d been and the work he’d done, sixty years previously.

And these boys did work. While the trawler was actively fishing, they could be on deck for up to 18 hours a day, either gutting fish – cod and haddock, pollock and halibut – or helping to pack the catch in ice. The black-and-white photo is of Peter, aged 14, already 6ft tall, standing beside a huge halibut. 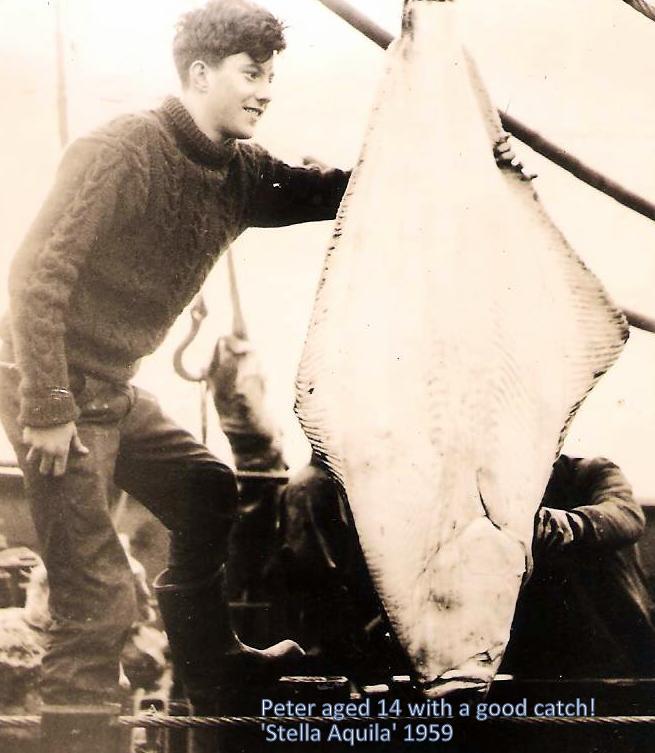 1959 Peter and halibut, aboard the trawler Stella Aquila

It’s fortunate that he and his friends made their holiday trips in the summer, when seas were calmer and the sun was shining for 20 hours a day. Imagine what it was like for the men and boys who fished for a living throughout the year? 20 hours of darkness in the winter, often battling ferocious seas, but still having to carry on working. Their lives and families depended on it.

Since then, times have changed. The British Merchant Navy – like the UK’s fishing industry – has virtually died. Nowadays, we import our fish and goods from abroad, on ships manned by foreign crews. Thanks to health and safety rules, our children no longer work in dangerous environments, and education is compulsory until the age of 18.

It strikes me that life and progress is like a lottery – you win some, you lose some. But protection comes at a cost – nowadays, self-reliance and life experience come later.

In editing this memoir – ‘Life & Luck’, compiled over several years – I’ve been looking back at how I’ve coped, often in the midst of crisis. Learning fast whilst trying to stay on my feet – rather like that boy on the boat.

Luckily, I never had to gut a fish – although ‘gutting’ a memoir does have certain similarities…