Just days after a cataract operation on my right eye, I find myself muttering, ‘Vanity, vanity – all is vanity!’ I’m seeing more clearly, which is a delight, BUT – and it’s a big one – mascara is now forbidden for two whole weeks!

The average man – and most brunettes – will not understand the horror I feel at such a prospect. But with fair hair and fair lashes, I reckon the last time I left the house without mascara was when I was still at school – and that’s half a century ago. I feel naked without it – in fact, when I look in the mirror it’s worse than that. It seems the real me is missing.

This has given me cause for reflection, not just on my own vanity, but on the very product that has boosted my ego for years.

Mascara – do we ever think about it as we reach for that prime cosmetic? For many women – and actors of any gender – it’s a regular routine to darken the eyelashes. It enhances the eyes and emphasises the facial expression. But when did this fashion begin, I wonder – and what is mascara anyway?

Thanks to some online research, I can reveal that mascara in various forms has been used for over 6,000 years. The ancient Egyptians started it, both men and women masking their eyes with kohl in order to ward off evil spirits. At that time, kohl was based on lead, ground malachite, crocodile dung and either soot or charcoal mixed with honey and water. The Greeks and Romans used it too – no doubt for less spiritual reasons – but it fell out of fashion in Europe once the Roman Empire collapsed.

It was not revived until the Victorian era saw a surge of interest in beauty products. Long dark eyelashes became desirable again, and women were using a form of mascara made at home. This was a heated mix of lampblack and elderberry juice – not exactly convenient to apply – but help was on its way. In 1834, a ten-year-old boy, Eugene Rimmel, came from Paris to London with his father, a perfumier. They opened their own ‘House of Rimmel’ cosmetics business on Bond St, and within ten years, young Eugene had become known as a trail-blazer in health and beauty products, and a first-class marketing expert.

He died in 1887, but his sons continued his experiments with mascara, based on coal dust and petroleum jelly. It was soft and messy to apply, but the Rimmel sons eventually arrived at a product containing soap and black dye, applied with a tiny brush. Introduced during WW1, it was the first ready-made block mascara. 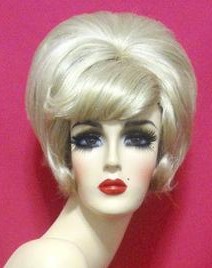 Thanks to marketing through mail-order catalogues and theatre programmes, it became so popular that the word ‘rimmel’ now means ‘mascara’ in several languages, including French, Italian, Spanish, Portuguese and Arabic – although curiously, the word ‘mascara’ evolved from the Spanish and Portuguese for ‘mask’. Some ancient Latin documents even used the word ‘mascara’ when referring to witches!

Around the same time as Rimmel, however, across the Atlantic, Thomas Lyle Williams created a similar substance for his sister Mabel – and by 1917, he was selling his ‘Maybelline’ mascara by mail-order. Both brands are still available today.

So why are we women so in love with the idea of enhancing our looks with mascara? We can blame the early film industry for that. The desire for dark lashes and a sultry glance was promoted by stars like Theda Bara and Mary Pickford in the 1920s, through to Greta Garbo and Bette Davis in the 1940s. The standards of beauty we recognise today were shaped by the cosmetics these women used and the ‘look’ they achieved.

Most women over a certain age will remember block mascara. It involved licking the brush or spitting on the block in its little plastic 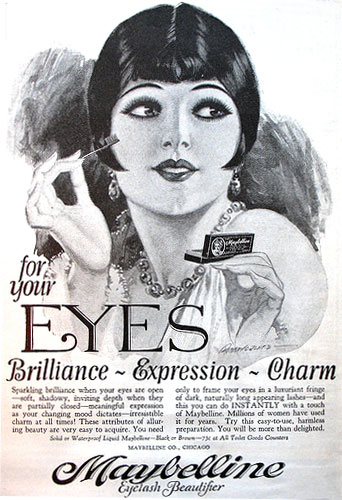 case, before applying a fresh coat to the lashes. Not exactly hygienic but it worked. This form continued throughout the 1940s and ‘50s until Helena Rubinstein created a formula to transform it into a creamy lotion, packaging it in a tube with a brush. Ta-da!  The wand was born – no more spitting!

Mascara can, of course, produce allergic reactions in some people. Fortunately, I’m not one of them. But Wiki informs me that due to the dreadful effects of mascara build-up, one middle-aged woman ruined her eyesight completely. This woman not only failed to remove her eye-make-up on a nightly basis, she NEVER removed it for 25 years!

That horrifying thought reminds me of the late Dusty Springfield, who boasted in the 1960s that she didn’t remove her eye make-up at the end of the day, either. Instead she powdered it, slept on it, and applied even more next morning…

Thankfully, that’s never been me – but it’s definitely time for a reality check. What’s more important – my looks or my eyesight?  No contest there – clear eyesight was the reason I had the cataract op in the first place.  So with that in mind I shall continue in my nakedness for the next week at least – and ponder meanwhile on the nature of vanity. I’m not sure I can bear it for a fortnight, but I’ll certainly try!