You must come inside!’

The order, from a very tall Sudanese gentleman, startled me. What had I done? Which rule had I broken? I thought I was fine, seated beneath a shady arcade and reading a book.

I said I was waiting for my husband, but the order was repeated. ‘Come inside – it is too hot!’ This tall gentleman in western clothes indicated the doorway from which he had emerged.

Well, it was July, we were in the deserts of Abu Dhabi, and you can imagine the heat. I wasn’t wearing a hat, but I was wearing a long, loose dress, a shirt top covering my neck and arms – and I was in the shade.

With a driver, Peter and I had travelled for over an hour from a small coastal town 150 miles west of Abu Dhabi City. We’d been heading for a local police station – or so we thought – to obtain an Abu Dhabi driving licence. Peter needed it to drive to and from the oil port where he’d recently begun working as a marine pilot – and I’d been invited along to see something of the area. But all I’d seen was a lot of wild and empty desert – no dunes, no palm trees, and not a single habitation.

But our destination was rather more than the local cop shop – it was the area Police HQ. As it came into view, my jaw dropped. It was like something out of ‘Beau Geste’ – a fortress rising out of the sand, with towers, battlements, and guards on the gate.

They checked our credentials before waving us through into a huge barrack-square. Leaving the car, Peter said he might be a while going through the formalities. I didn’t fancy waiting in an office – not with the buildings of this amazing fort to look at – so I suggested waiting where there were seats in the shade.

I watched the two men walk across the square. They hadn’t been gone more than a few minutes when the Sudanese gentleman stepped out of his office, looked at me disapprovingly, and issued his order to come inside.

I hesitated, torn between not wanting to offend, and fears that I was about to be spirited away to some kind of white slave market.

I know – I read too many novels. But this was back in the 1990s, and my first visit to the UAE. So far I’d been staying in a beachside hotel where the marine pilots lived while on their tour of duty. Many of the pilots had their wives with them, and the women had given me the lowdown on dress code. Almost anything was okay within the bounds of the hotel, but they all agreed it was better to dress modestly while out and about. Modest being no sleeveless tops or mini-skirts.

But this was the wilds of Arabia as far as I was concerned, I wasn’t too sure about local etiquette, and I didn’t have a scarf to cover my blonde hair. What’s more, I hadn’t a clue who this man was.

With great trepidation, I obeyed the command to ‘come inside!’ He held the door open for me and drew out a chair. Nervously, I nodded to the Arab gentleman in full regalia, sitting behind a desk. He nodded back but didn’t speak. I pulled my chair closer to the full-length window beside the door.

Through the fine net curtain, I could see the barrack-square with its enormous walls. While pretending to read I kept glancing out and willing Peter to hurry up. 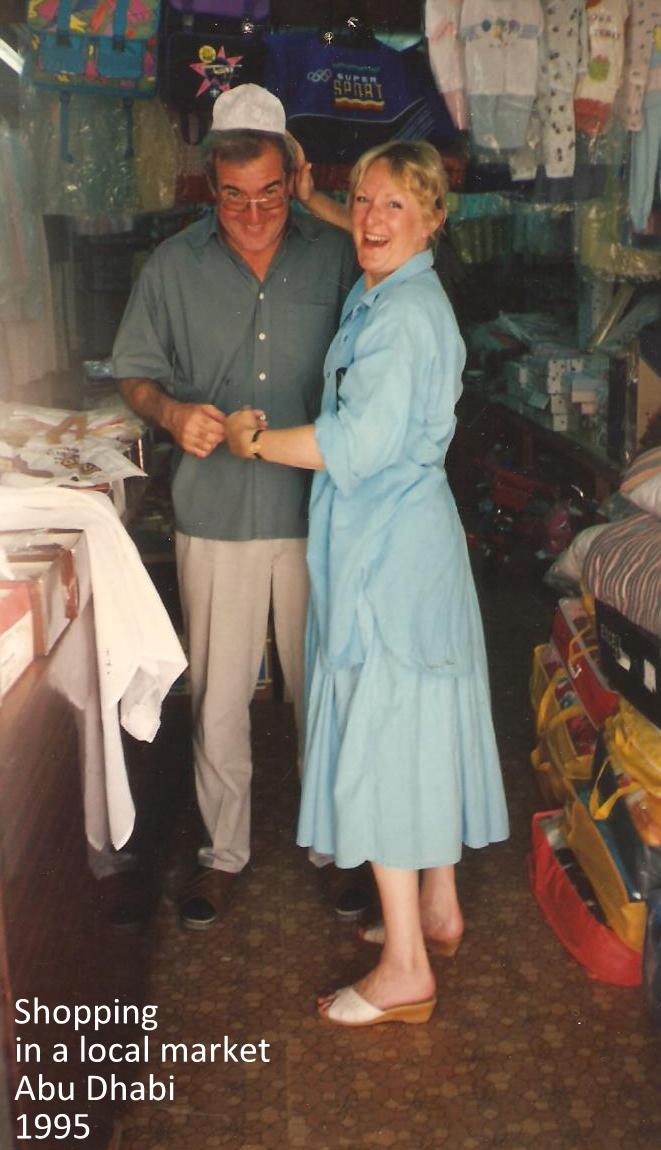 The two men conducted a conversation in Arabic. What were they saying? Plotting my abduction, or merely commenting on the idiocy of western women?

A few minutes later I heard a shuffling. Startled, I turned to see a little man, bowing so low he was almost crawling. He was bearing a tray with a glass of tea, and darting glances at me as though staring would earn him the chop.

In the midst of my astonishment, it dawned that this was a gesture of hospitality. I smiled and thanked him, whereupon he bowed so low his forehead almost touched the floor. Glancing up at my hosts as the little man backed away, I felt like a medieval queen at a foreign court.

The tea was hot, sweet, and welcome, but even so I was as taut as a bowstring, praying it wasn’t drugged. Most of all that Peter would rescue me before I disappeared from his life forever.

At last he appeared, walking towards me from across the barrack-square – I wanted to run outside and cheer. My smile as I stood up must have said it all. I thanked my hosts, said my husband was here now, and I simply must go.

I couldn’t get out fast enough.

Words were bubbling inside, but the presence of our driver meant I had to keep the real story back until we reached the hotel. When I told Peter, he laughed, reminding me that it was the police headquarters, after all – they were hardly a gang of white-slavers!

Of course, but illogical terrors have nothing to do with reason. And as for the little man with the tea, as Peter said, he might never have seen a woman with blonde hair before.

But it was many years later that I finally understood why I was both startled and scared by the Sudanese officer who ordered me inside. He didn’t smile, and he didn’t say the one word that we Brits recognise as friendly and polite. The word we have dinned into us from early childhood.

We use it all the time. Such a little word, but it contains a world of meaning. And we tend to forget that other cultures don’t always understand its use – some languages don’t even have a word for it. Instead, they have their own forms of politeness – such as hospitality to strangers. In this case, to mad Englishwomen who fail to grasp the effects of summer heat in the desert!

[NB – the fort shown in the picture is the Mezyad Fort, Abu Dhabi – courtesy of Wikimedia Commons. It’s very similar to the one I describe, except for the cliffs in the background.]