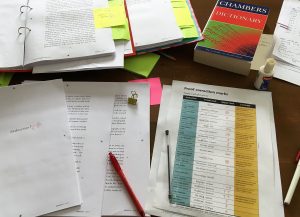 One of those days, or three of those weeks? Not sure how to begin this tale of bliss and anguish.

The printers’ proofs for my sixth novel arrived just as I was preparing a talk to be given in York on 9thApril, to a group of retired Unison members. Facts Behind the Fiction, was the title, a tale of beginnings, endings and coincidence along the road to my first two novels, Louisa Elliott and Liam’s Story.

But the printer’s proofs for my new novel – One Night, Two Lives – had to be checked and returned, the email said, in three weeks. That’s three weeks ago. Exciting in one sense – but daunting, too. It’s a long time since I was faced by this traditional task, and I knew it would take time and care.

There was much to do first, including preparing for the trip to York. We were also visiting our son and family on the way north, and our daughter and her family near Scarborough. Six days away in total.

The family visits were delightful as ever, and despite my usual anxieties, the talk was well received. Someone said it was like listening to a story on the radio – one that began in York and took the listener across the world and back – such a lovely compliment.

The church hall venue was another coincidence to add to my tale. It was next to the car park where I used to leave the car on those long-ago journeys from Otley to York, while doing research at the archives and library. I’d pass the church hall, cross Marygate, walk through the Museum Gardens, and emerge where the Minster dominates the view. Always a joyful moment.

Amongst the Unison group were several long-term fans, who’d brought their old hardbacks along for me to sign – a pleasure in itself – while my tale of the books’ inspiration, inspired others to purchase new copies. Altogether a warm and wonderful experience for the author.

Home to Southampton on Wednesday, and Captain Peter was back to the ship next day. Time for me to get down to those printers’ proofs. A few transitional blips had occurred between Word Doc and print file, but in my careful reading I spotted spelling errors. You know, those nightmare words that end in ‘ise’ – or is it ‘ize’? Recognize, organize, and the ilk. But NOT surprized!

No, I didn’t fall for that one, but my careful attention to the correct form of certain words held out only in the first half of the novel. After that I’d lost it, slipping back to the casual, modern-day Brit version of aforesaid words. The fact that Microsoft Word doesn’t highlight either version of these spellings as being wrong, meant that I hadn’t noticed the slips. Whichever way you spell it, you have to be consistent.

But the worst – the very worst – problem, was that the last line of the novel ended at the very foot of the very last page.

A deliberately open ending, which even had me, the author, looking to see if there was more….

Cue for much cursing.

‘Is this telling me something?’ I wondered. After all those struggles to get the ending right, I began to suspect I’d failed on the last page. A bit of tweaking could have cured the problem, but I felt it needed something more. Not much, but what?

Leaving it abeyance, I got on with the practical stuff – correcting mistakes and inserting the odd missing word. I focused on marking until I could think about that ending.

It’s well-advised to pass on the proofs to someone else – a fresh eye sees so much more. Captain Peter had volunteered initially, but he was working aboard ship. Thankfully, a writer friend said she had time to do it – the plus being that she had only read sections of the novel previously, and never the whole thing.

Three days later, she got back to me with errors she’d spotted and I’d missed. ‘But as for the ending,’ she said, ‘I turned the page, expecting more…’

Yes indeed. We talked about the characters and their decisions – and my decisions too. I thought about it, slept on it, and set to work the following day.

Readers, you’ll be glad to know that the additional half-page gives a clearer conclusion.

But the main message to the writers out there is this – get a critical friend to go through your manuscript, and do it before you get to page proof stage!

Well, after three days of careful copying and marking, the corrected pages are about to go back to the publisher. So, with fingers crossed, I’m now looking forward to the publication date at the end of September. 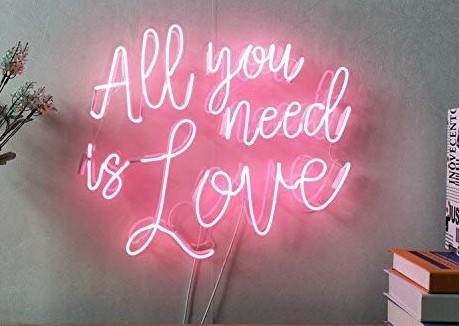 That’s not quite all, because like icing on the cake, this week also saw my birthday with lots of lovely cards. Captain Peter was able to get home midweek, and we had a delightful, relaxing lunch in a country pub in the New Forest, followed by a beautiful walk in Exbury Gardens. Maples coming into spring leaf, cherry blossom, and here and there the vivid mass of azaleas and rhododendrons. The following evening – rather like my novel’s main character, Suzie – we took a trip back to the 1960s, and enjoyed a Beatles extravaganza at the Mayflower theatre in Southampton.

‘All You Need is Love’ – a fitting conclusion to three challenging but exciting weeks!