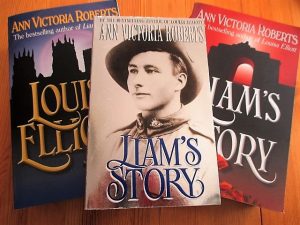 For family reasons, I’ll withhold the surname. Enough to say that William – his given name – was my grandfather’s brother. Both served in WW1, Will with the Australians, as a machine gunner, and Bob with the Royal Field Artillery, as a horseman. The family came from York.

I spent most of my early life in West Yorkshire, but visits to Grandma in York, were a regular childhood treat. Although she wasn’t a great reader, Grandma had a virtual library housed in the attic, legacy of her father-in-law, a bookbinder. Amongst his books were some of my favourites, bound collections of illustrated Victorian magazines.

As a teenager, I was often there during school holidays, and during one visit I was concerned to hear the roof had been leaking, and Grandma had moved some of the books. Searching for my favourites, I came across a stack of volumes I hadn’t seen before, still in their cardboard covers. One, bound in gold, was a souvenir of the Coronation of George VI, in 1937. After marvelling at pictures of our present Queen as a little girl – and all the ladies in old-fashioned frocks and extraordinary hats – I put it aside and reached for another.

Bound in black, Covenants with Death was a picture book of a different nature. If the first was celebration, this was grief in all its aspects. Royalty featured somewhere, visiting the troops, but drab uniforms made them difficult to spot. There were heaps of rubble that might once have been a town, and queues of men, bandaged and blindfolded. Aerial shots of shell holes and stumps of trees featured in an endless muddy swamp; picture after picture of bloated horses and barbed wire, half-buried artillery and trenches strewn with broken bodies. And crowning the horror, like a parody of the monarch making his vows, a uniformed skeleton with hand to breast, skull gaping for the camera. 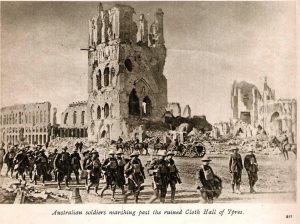 Since then, such images have become familiar to most of us. But I was just fifteen and they shocked me. That was my introduction to the Great War, with pictures that made Grandma’s story of being blown up at a munitions factory during WW1, seem like a minor domestic accident.

That was all I knew of her experiences between 1914 and 1918. As for my grandfather Bob, other than his fateful bout of rheumatic fever in 1917, I knew nothing of his war either. Yet here was the evidence: monochrome snapshots of overwhelming reality.

I closed the book carefully, as though something still lived inside. Pushing it back into its cardboard sleeve, I almost dreaded what I might find in the next box. To my relief, it contained nothing more threatening than family obituary notices. But there was official correspondence too, concerning the Menin Gate. And a mounted photograph, showing a massive archway, white stone flanked by brick, standing in solitary grandeur.

So, I thought, this is the place my mother associated with wayside poppies dancing in the breeze. It looked like an entrance into a walled city – rather like York’s Micklegate Bar. Except there were no walls to be seen, and the Menin Gate seemed unattached to anything that might be called a town. I know now that it was photographed in the early 1920s, after the mounds of rubble were cleared, but before the Flemish wool town of Ypres was rebuilt.

Opening a heavier envelope, to my surprise I found a quarto photograph, on stiff card and unframed, of a handsome young soldier. He wore the distinctive bush hat of the Australian forces, tipped back to give a good three-quarter view of the face. Like a classic portrait, below the chest the battledress was faded, the background just a few sketched lines on what might have been white paper.

Following what I’d just seen, it had the most extraordinary impact. Shock, maybe. Surprise, certainly, followed by a moment of warmth. It was as though I’d finally come face to face with someone I’d heard about and always wanted to meet.

With age and hindsight I can see the portrait was by a photographer who knew his craft. But Will was killed just days before his 24th birthday, and knowledge like that strikes deep. By reputation he was a decent man, but even so, something seems to elevate those who die young, especially in war. The camera fixes a moment of nobility, while the mind dwells on sacrifice.

Hard to match that with the book I’d just set aside. But if there was precious little nobility in those pictures, the sacrifice could not be questioned. With that unmarked face before me, eyes gazing steadfastly at a point somewhere to my left, I felt the tragedy of his death like a personal loss.

Saddened, chastened, I was about to restore things to their rightful place when I realized there was something else in the envelope, something small but quite weighty. Bound in indigo, with Gothic initials impressed in gold leaf on the cover, a little book slid into my hands.

I could barely believe my eyes as I read the flyleaf. Will’s name and signature, his three digit army number and the unit to which he was attached: a machine gun company of the 2nd Infantry Brigade, Australian Imperial Forces. Below, was written: In the event of my death, please forward this diary to – there followed his father’s name and an address in York. 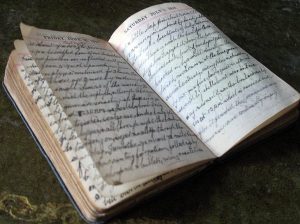 ‘In the event of my death…’ That gave a chill. ‘Blown to bits,’ my mother had said, gazing at the wayside poppies. ‘Nothing left to bury…No known grave… his name is on the Menin Gate…’

I stroked the little diary, imagining the writer’s fingers around it, the times he must have clutched it, pocketed it. Incredible to think I was holding something so precious. I turned each leaf, finding writing so tiny it was hard to read. The Memoranda ran to several pages, densely written, and then, surprisingly, just a few brief comments at the beginning of the year.

One read: ‘Drill as usual. 5th& 6th Batt leave Tel el Kebir for Suez. Living on dry bread and tea, except for what we buy.’

Since we didn’t do modern history at school, I started digging in an old encyclopaedia. If most of it seemed obscure at the time, the huge entry devoted to what we now call WW1, gave an overall picture of the conflict. I was able to identify the front line as it cut through France and Belgium, and to establish how Egypt, Turkey, Gallipoli and the Dardanelles came into the equation.

Eagerly, I tried to match the diary to the bigger picture, but it was difficult, like having a dozen or so pieces of a 1000-piece jigsaw. In the diary, The Somme wasn’t even the Somme, it was Albert, Pozieres and La Boisselle. Flanders was Armentieres and Poperinghe, Ypres and the Menin Road.

Not until the diary came into my possession, almost twenty years later, did my enthusiasm take hold again. By then, however, I was ready to do some real research. Despite my inexperience, I kept meeting the right people – seemingly by chance – who shared their knowledge and helped me along the way.

Nine years down the line, I had written what turned out to be two bestsellers – ‘Louisa Elliott’, set in 1890s York, and ‘Liam’s Story’, about the writer of the diary. Those years of research and writing, were blessed by a seemingly endless string of coincidences. These seemed to come to an end with the unexpected appearance of poppies in my garden, in the summer of 1991, the year that Will’s/Liam’s story was first published. As though the ‘presence’ I’d been aware of for so many years, had been working hard and, now that his story was told, he could finally rest. 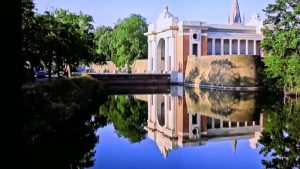 That’s a long time ago. But in the last few days there have been three more coincidences. The most remarkable was seeing – to gasps of astonishment – his name on television.

On Sunday, 30th July 2017, the BBC paid tribute to the fallen of Passchendaele in a programme broadcast from the Menin Gate, Ypres. The great arch bears almost 55,000 names – those of the British Empire whose graves were lost during a battle lasting more than three months. 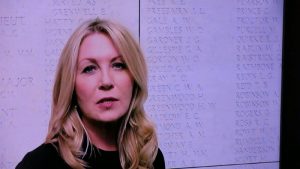 Like being tapped on the shoulder. Don’t forget, he seemed to be saying, my anniversary is coming up soon…

It’s okay, Will, we hadn’t forgotten. 20th September, the Battle of the Menin Road – we’ll be there.