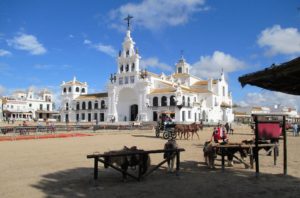 1 Outside the church in El Rocio

Leaving Lagos in Portugal, we headed east for the Spanish border. It was Friday and we were late saying farewell to all our friends, so decided to stop short of Seville at a little place someone had recommended – El Rocio.

The campsite description in the ACSI book sounded good, with the added plus of being just a short walk into town. It was quiet but we had a decent meal in the bar-restaurant that evening, and next morning set off walking. 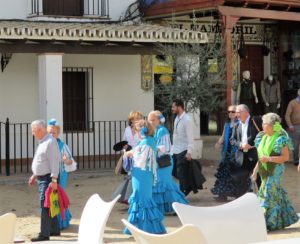 2 Members of the choir leaving church

The site’s roads and pitches were hard-packed sand, so we should have been prepared for a total lack of tarmac or even gravel. But El Rocio’s broad avenues – lined by some truly grand buildings – were entirely sand! It seemed so incongruous, I couldn’t stop exclaiming as cars passed us heading for the main square – and not only cars. We saw horses being ridden down the streets and hitching posts outside every building – and, close to the centre, two & four-wheeled carriages carrying sightseers around. 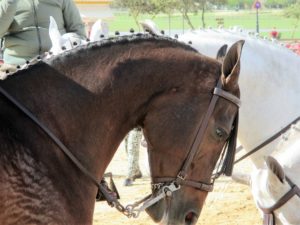 Outside El Rocio’s grand church, riders were astride some fine looking mounts with superbly arched necks, and all seemed to be waiting for something to happen. We half expected a cheroot-chewing Clint Eastwood to come riding in, poncho flapping and six-gun at the ready.

Earlier, we’d heard bells ringing at noon – too long for a time check. ‘Midday Mass,’ I said to Peter, and I was right, even though it was Saturday. People were coming and going, so we crept into this huge church, dazzled by the gilded chancel and unable to believe our ears as singing broke out from somewhere above. It sounded like flamenco, complete with handclaps and I swear an olé or two thrown in.

As the priest carried on saying Mass, I turned and glimpsed the choir in the gallery – and later saw them all leaving, the ladies in blue flamenco dresses, the men in dark suits. Rather different from the Anglican service we’d been to in Lagos – and very different from Sunday church at home!

The horses were still outside, and announcements kept coming from across the plaza – turned out there was a marathon event taking place, and later we saw some of the runners arriving. By a nearby chapel, an old gypsy woman was begging. I found a few coins and slipped them into her cup, whereupon she kissed my hand and blessed me – whereupon I felt guilty as I walked on, for not giving her more…

Over a tapas lunch, we heard that there was to be a fiesta later on. It would have been good to hang around but the weather was a bit iffy, and – with plans for Seville next day – we needed an early night.

After a chilly start to Sunday morning, the sun was soon rising into a clear blue sky. Our camp for the night was in a most extraordinary place. In France it would have been called an ‘aire de repos’ – in other words, nothing fancy, but a place in town in which motorhomes could stop overnight. An in this case, a secure place, behind big gates.

All we had were brief details and the longitude and latitude. We went up and down the same road a couple of times before we found the place, which turned out to be beside the River Guadalquivir. On the docks, in fact. Which was another surprise as we hadn’t realised that Seville, apparently so far inland, is a port.

Sunday was quiet, and we crossed a nearby bridge to walk a mile or so through riverside parks into town. Our map was not the best, but with a Moorish tower in sight, I figured it had to be close to the cathedral and famous Alcazar palace and gardens. 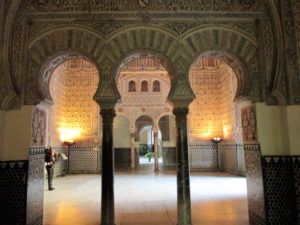 6 Inside the Alcazar Palace Seville

Seville. What can I say that hasn’t already been said about this amazing city? Fantastic architecture that speaks of its long history – a tragic history in truth – but so fascinating to modern eyes. We snapped away at the famous Giralda Tower built by the Moors while avoiding horse-drawn carriages in the nearby square. But being short of time we by-passed the cathedral in favour of the nearby Alcazar which I was longing to see.

This Islamic palace built by the Moors, adapted by the Christian Kings of Spain, is a mix of cultures enhanced by its beautiful gardens and fountains. We wandered through ornately decorated rooms, and, dozens of photographs later, I have to say none of them do justice to a building which has been in use for more than a thousand years.

Uplifted by the experience, sunset caught us almost unawares. Suddenly chilled and hungry, we left the palace and gardens behind, and – following info from a tourist guide – entered the old medieval Jewish enclave of narrow streets to find sustenance. Shops selling guitars and flamenco frocks rubbed shoulders with tapas bars, and we soon found a bar where we could sit outside with a warming fire, while watching the world go by. Seville it seems, even in the early evening, knows how to party!

Some excellent food and wine restored the inner need, and prompted a few reflections on the city’s history. Rich, multi-racial, passionate, intolerant, cruel, and yet retaining an eye for beauty and refinement. I refuse to comment on bullfighting, except to say that the second bar we went into (before taking a taxi back to base) had two massive bulls’ heads as ornament.

After walking our feet off, and after all we’d absorbed mentally, we slept like tops that night. It was rather a surprise next morning to be woken by sounds of activity close by. When we stepped outside, it was to see ships across the river being unloaded – and that our secure enclave was in fact a holding park for imported cars.