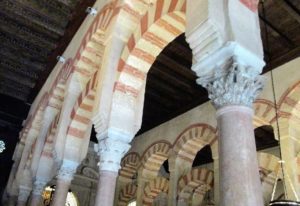 Visiting the Mezquita has been the achievement of an ambition. Perhaps ambition is too strong a word, but my longing to see it was fired when I was a child barely able to read. In the 1950s illustrated books for children were rare, so I turned to what was available on the shelves at home. Fortunately, my father had a set of books published by Odhams Press sometime in the 1930s, full of black & white photos. One volume was The World’s Greatest Wonders.

Of the many pictures within, one showed dozens of columns with striped horseshoe arches, the few lines below describing it as the mosque in Cordoba which became a church. I couldn’t quite figure it out, but the image remained in my mind. And now I’ve actually been there and seen it for myself, how to describe the Mezquita in short blog? 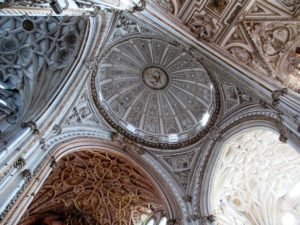 2 Inside the dome of the cathedral

Basically, it’s a great story of recycling. The Mezquita has been a Roman temple, a small Gothic basilica, a huge Islamic mosque and a Christian cathedral. It stands in Cordoba by the great Roman bridge over the Guadalquivir river.

It spans almost two thousand years of history. As is usual in most European cities, the Romans were here first – as evidenced by many of the columns and in the tiled pavement under the Mezquita’s floor. The Visigoths kicked the Romans out but used the pagan temple to build their Christian basilica around 600 AD. But when the Moors arrived in 711 to conquer the Visigoths and settle in Al Andalus, they took control and made Cordoba their capital. 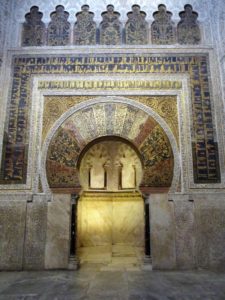 For some fifty years, the church/mosque was used equally by Christians and Muslims, but the next ruler, Abd al Rahman I, was determined to build a great mosque to rival the one in Damascus. He bought the Christian half of the church – yes, bought it, which seems pretty fair to me – allowing the Christians to build other places of worship. In 784 he started constructing his magnificent mosque, using Roman marble columns which had been part of both temple and basilica, and bringing in others from all over southern Spain.

Eventually, over the next two centuries, the mosque was completed, with 856 marble columns topped by pink and white horseshoe arches. Its pillars – topped by arch upon arch – have been described as being ‘like rows of palm trees,’ and they do indeed give that impression.

As anyone interested in history will be aware, the Moors in Spain were eventually driven out by the fanatical Christian rulers of northern Spain. In 1236 King Ferdinand of Castile took Cordoba and the mosque was returned to Christianity, with a church constructed at the centre.

3 Aerial photo of the Mezquita, Wikipedia

What was reputedly a simple church has expanded into a vast space, with soaring columns supporting a domed roof in Renaissance style. [see the aerial photo – courtesy of Wikipedia] Not so much gold, nor so many statues as in other Catholic churches I’ve seen recently, but even so that part of the building seems overblown. As though the later religious architects were trying too hard to stamp their identity on the place.

5 Endless space inside the Mezquita

Didn’t do it for me. What remains in my mind is the simplicity of the original building, with its elegant Roman columns, its palm-tree arches, azulejo tiles of the Mihrab prayer alcove, and the Mezquita’s sense of endless space. Most of all, the sense of excitement I experienced on finally seeing the reality after some sixty years of holding that black & white image in my mind.