I’ve always been a night-owl, partying late as a teenager, writing late in my prime, and in more recent years – when I stopped working after dinner – watching TV or reading until about midnight. But in the last few weeks I’ve been glad to get to bed around 9pm – and here on the Algarve, I’ve been waking with the birds around dawn.

The weather is great during the day but turns distinctly chilly after sunset. So the social life amongst our neighbours – many of whom are here for the winter – is mostly daytime.

Two days ago, for instance, with Anne & Fred we were invited to a wine-tasting, hosted by our Australian neighbours – wine buffs who’ve been travelling around Europe for the past five years. The event started at 2.30 in the afternoon, and we were privileged to sample some great Spanish and Portuguese wines, while snacking on cheeses and nibbles. 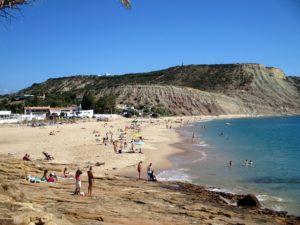 Alan and Alison keep their wines aboard their motorhome – over 100 bottles, the whites in a special chiller cabinet. They home on wheels is no bigger than ours, so where exactly they keep them is a mystery to me. But I digress. We had a great afternoon, learning a lot about the areas these wines were grown, the bodegas and quintas they’d visited, and just generally chatting with a fascinating couple.

I guess we should have spat the samples out, as per the professionals – but we didn’t, the wines were too good. And later, perhaps that final bottle of red was a mistake…

We staggered back to the Classy Chassis – all of thirty paces – around 7pm. It felt like midnight. And we were totally Brahms & Liszt. 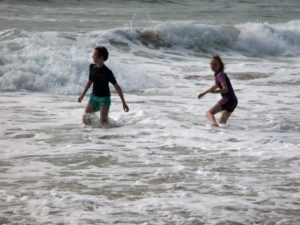 A good thing we weren’t invited to the wine tasting last week while our son Scott and two grandchildren were here. With them, we did the local beaches each morning – well, apart from the day it rained, when we formed a party of nine and went to a local restaurant for lunch.

And that’s the thing about Turiscampo, http://www.turiscampo.com/en Here are stylish chalets, good pitches for the caravans and motorhomes, shower and toilet facilities that many a hotel would envy, plus an excellent swimming pool and restaurant. Some of the new chalet groups even boast a Jacuzzi. It’s also well-placed for some great beaches along the Algarve, so Corin & Oscar – aged 10 and 12 – have had a great week. 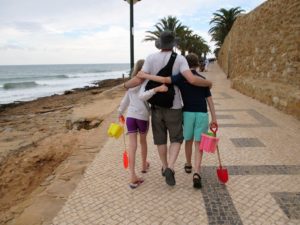 We’re just a short distance from Luz bay and village, and maybe three miles from the historic town of Lagos. Westwards, just a half-hour drive takes you to the dramatic coastline north of Cape St Vincent, with its cliffs and bays, and seabirds by the score. No wonder people return here year after year – apart from the Brits, there are visitors from France, Holland and Germany, and this year we’ve seen several Swedish motorhomes too.

We’ve stayed with the motorhome only once before, but in the interim we’ve flown out for a week in the winter, to meet up with old friends Anne & Fred, and renew acquaintance with other regular visitors.

With much to be thankful for, on Sunday we went to the local church in Luz – a beautiful building shared by both Catholics and Anglicans. Warm greetings and joyful singing made for a delightful hour.

Revisiting favourite places and discovering new ones, we’ve had a great few weeks here. Sadly, it’s almost time to say farewell to our friends, and start the journey home. But we’ll be visiting some new places on the way back through Spain – Seville, Cordoba and Madrid – so stay tuned for more news!