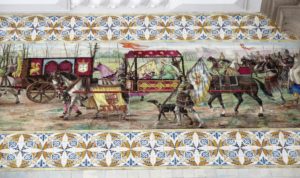 Porto is a fascinating city – certainly worth more than one brief visit. Thanks to ease of travel on the new metro link, it wasn’t a problem to go in again.  We’d gained an overall view previously, but somehow missed seeing the São Bento railway station. 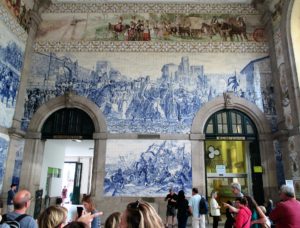 Michael Portillo began one of his Continental railway journeys from Porto, and São Bento’s main hall is breathtaking, covered in the blue and white azulejo tiles for which Portugal is famous. The artwork here illustrates Portugal’s history as well as the history of transport. I particularly loved the image of a little train – very Art Deco – that wouldn’t have been out of place on a Thomas the Tank Engine story.

Re the historical pics, it’s interesting that in the UK we are hardly aware of dynastic marriages in the distant past, and yet here, taking up half a vast wall, is depicted the marriage in 1387 of King João I (John) to Philippa of Lancaster, sister to Henry IV of England. King João and his queen were married in the nearby Cathedral – cue for more tile illustrations – but that marriage sealed the pact of friendship between our two countries, which has continued to this day.  (See my blog, Portugal: A Few Friendly Facts) 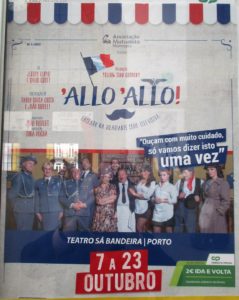 As a counterpoint to all this high-minded stuff, we saw a poster in the station advertising a Portuguese production of ‘Allo, Allo,’ with an actor looking just like Rene Artois – and overlooking the train tracks, an exhortation to ‘Feed the Pigeons’!

Michael Portillo’s train journey took him along the Douro to the great quintas where grapes are grown to make the port for which the city is famous throughout the world. Being short on time we had to pass on that, but promised ourselves a taste of Porto’s best on the far side of the river.

Considering the UK’s focus on ‘elf & safety’, when we crossed the high level bridge across the Douro, it was astonishing to find the footpath sharing with the Metro line. Yes, I did say sharing. No barriers, just the occasional bollard – no steel mesh to prevent would-be suicides from either flinging themselves under a train or leaping off the bridge to the Douro, over 130’ below.

After that experience, we certainly needed a restorative, so it was down and round, along a series of steep, winding streets following the port wine cellars and warehouses which dominate the south side of the river. There, you see signs for Taylor’s, Graham’s, Cockburn, Offley, Sandeman and others less well known in UK – we chose the Sandeman forecourt and ordered a ‘small’ glass of tawny port – wonderful!

Coincidentally, while we were sipping, we saw a group of university students going past, both sexes dressed in their traditional black suits and flowing capes. We’d seen them earlier at the station, and for a mad moment imagined they were going to a Dracula convention – but no, they were far too lively. And as the barman went on to explain, their dress – complete with the Spanish hat – was the inspiration for the Sandeman port logo.

After that it was time to return to the Metro station for a train back to our campsite at Vila Cha. And did I mention the sea-frets there? A bit like Whitby, with mist rolling in from the ocean as soon as the coastal strip warms up in the sun, not to roll out again until evening time.

But we’re moving south, to another little place on the coast, Nazaré, not far from lovely Alcobaça and its amazing Cistercian monastery. See you there!