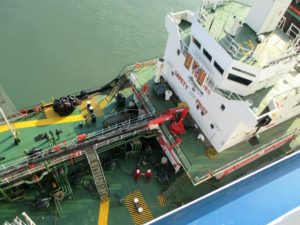 Aboard the Brittany ferry Pont Aven, we were sunning ourselves on deck as we waited to set sail from Portsmouth, when Capt Peter noticed the Whitaker tanker, Whitchampion, was alongside, refuelling the ferry.

The small tanker is one he commands occasionally, acting as a relief master – just as he has often refuelled the Pont Aven. So he was delighted to see some old shipmates aboard. Greetings were exchanged and photos taken as we waited to sail for Santander.

It was Tuesday, 13th September, and we’d had a busy few days beforehand. After a fantastic weekend in London with family & friends to celebrate our Golden Wedding Anniversary, we completed our packing for this extended trip and – for the first time ever – managed to get away on time. Not so the ferry, however. For some reason it was delayed, and the Whitchallenger was long gone by the time we sailed at 6 pm.

The ferry was carrying a full load of passengers, the majority of whom seemed to be retirement age – oldies like ourselves, no doubt grabbing the first opportunity to get away after the grandkids had gone back to school.
As the Isle of Wight disappeared behind us, the clouds were closing in; by the end of dinner, everyone was staggering a little as the ship moved through distinctly choppy waters. I slept pretty well considering – the mattress on my bunk was more like a plank – but I was aware of the ship changing course into the Bay of Biscay, and a few thumps and bangs after that. By the time I was fully awake the weather was ferocious. The wind was howling, white horses were leaping the waves and, by lunchtime, spray was regularly smacking the forward windows.

I found myself smiling, thinking of the long voyages we’d made years ago when our children were young. Standing on the bridge with Capt Peter, laughing at the waves coming ‘green over the fo’c’sle,’ and rolling down the decks. That was fun, but these sharp Atlantic squalls did not augur well for the days ahead. 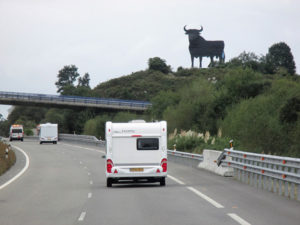 Reaching Santander at 7pm Spanish time, we had a fight with the new sat-nav, not helped by my 2010 atlas for Spain & Portugal. We were going in the right direction, although Sat-Nav Sheila was set to shortest route – off the motorway and onto the coast road, then twice round a hill-top village with cobbled streets and no way forward. So it was back to the coast until we found our rendezvous, Campsite Oyambre at San Vicente de la Barquera.

It was 8.30, getting dark and raining, but our friends Anne & Fred had arrived from France, together with their two little Fell terriers, Zazie & Jim.

After warm greetings and parking the van, first thing we did was head for the bar and a much-needed drink – and then to the restaurant. An excellent meal of prawns, followed by chicken, followed by a kind of crème caramel and coffee, put us in happier mood, and ensured a good night’s sleep.

We all needed a day or so to chill out, but Fred and Peter were concerned about the weather – and getting a clear signal on the mobiles for a decent forecast proved to be difficult. Wi-fi was virtually non-existent. We were facing the stormy Bay of Biscay, with the Picos de Europa, behind us. Peter was convinced the stormy weather was locked in by the mountains, and that the sun would be shining beyond them. Only one snag – the Picos stretch almost to the Portuguese border – some 350 miles away. A longer drive than we wanted to do in one day. So we voted to move west for a couple of nights before heading directly south for the sun. 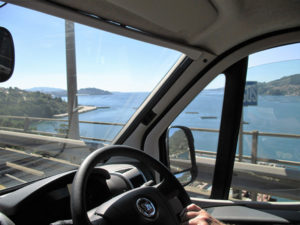 3 Crossing the river Minho from Spain into Portugal

Having sorted out Sat-Nav Sheila, we took the smooth new motorway through the mountains. A day of easy driving and spectacular scenery, with an amazing number of viaducts sweeping across the valleys. Santiago de Compostela appeared in the distance, its cathedral towers standing clear above the town. We’d planned to spend a couple of days there, but – thanks to weather more like England than sunny Spain – we simply waved, and said, ‘Maybe next time…’

That afternoon – Sunday – we crossed the River Miño/Minho which divides Spain from Portugal, and a few miles further on reached the estuary at Caminha and our campsite by the beach. The setting, surrounded by tall pines and eucalyptus, was beautiful, and the skies were clear. 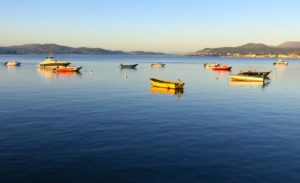 4 Spain & Portugal on either side of River Minho

With our friends, we took the dogs for a petit promenade, as Fred calls it, along the boardwalk. To the right, small boats were anchored in the peaceful estuary, and to the left stretched the ocean, so calm that evening it was hard to believe it had been so violent just a few days before. Watching the sunset, we felt that at last we’d reached a warm & welcoming climate – and to my relief, the wi-fi on camp was clear and true. At last, I thought, I can communicate with home!