The thing about travelling is not simply the extraordinary places, but the people you meet en route. One of the first we enjoyed talking to on this trip was a salesgirl aboard the Pont Aven.

She was from Brest in Brittany, lively and attractive, capturing Capt Peter’s attention while I was studying handbags and he was viewing special offers in the booze department. Having chosen his bottle of Barbados rum, he was looking at the Gordon’s gin – my favourite pre-dinner tipple after a hard day’s writing.

When I joined them, she was waxing lyrical – in a lovely French accent – about a special gin by the name of The Botanist, made on the Hebridean island of Islay. Islay, of course, is famous for its malt whisky – but it seems they also make this gin, flavoured by, quote: ‘22 local herbs and flowers, foraged responsibly and by hand…’

Well, that’s as maybe, I thought. I’m one for Gordon’s Gin with my Schweppes Tonic at the end of the day. Ice and a slice, mandatory.

But this charming lady had an ace up her sleeve – or rather, an opened bottle of The Botanist in the fridge. ‘Why not try some?’ she said. ‘It really is good, and a taste will help you decide…’

So there we were, sipping neat gin at 11 am, and tasting the floral bouquet… Needless to say, a rather large bottle of Islay’s finest went into the basket, along with the Gordon’s and the Mount Gay rum. All topped off by a perfect holiday handbag with shoulder strap. I doubt Capt Peter noticed the bag – he was too busy chatting about the similarities between the Welsh and Breton languages to notice…

And all this while we were swaying, feet apart, as the ship ploughed on through some choppy seas.

Some hours later, just before disembarking into a rain-swept Santander, we bumped into the charming couple we’d been chatting to over dinner the evening before. They were from Surrey, in their late fifties, and he was a solicitor. I mention this only because I’d imagined them travelling in a top of the range car, and was astonished to learn that they were touring northern Spain by motorbike.

Viewing the rain beating against the forward windows, I hope their plans were flexible, and that they headed directly south for better weather.

For the past few days we’ve been enjoying the sun and staying at Vila Cha, a fishing village north of Porto with some tiny traditional houses and lots of unusual artwork. Very unusual in some cases. I spotted a strange figure outside a coffee (?) shop – he seemed to have been waiting some time…

There’s also a boardwalk along the beach which seems to go on for miles, great for walking Anne & Fred’s little terriers, and also for viewing the sunset.

The campsite here is pretty good too, although it was a surprise to be guided to our parking spot by a very fussy guy who placed us to the inch. It seemed odd, as in our experience the Portuguese are relaxed about most things. Also, there were no designated places, just a big space interspersed with tall pines and eucalypts. But we soon found out why he wanted us ‘just here’ – within the hour we were surrounded by other campers.

Amongst our new neighbours, we met an American girl in a tent, who is dreading the forthcoming Presidential election and says she’s coming to live in Europe if Trump gets in; and across the way a lovely German couple with a year-old baby, who were taking advantage of his-n-her maternity leave to tour Portugal in their caravan. We ended up having a lovely lunch with them at a restaurant just a short walk away – overlooking the ocean. 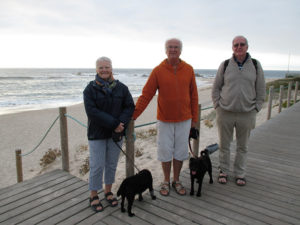 Here at Vila Cha we’re just a couple of miles from the Metro station and a modern train which zoomed us into Porto within half an hour. All for just five euros each. Once there, walking down a rather grand main street, we stopped for an al fresco coffee outside a posh restaurant – all Art Deco inside with elegantly set tables. Even better on the eye was our waiter – tall, dark and incredibly handsome, his white waiter’s jacket fitting him like a glove. Fitting him so well, in fact, he just had to be a body-builder in his spare time. Just the sort to be featured, I thought with a wry grin, on the cover of some exotic/erotic romance.

Pity I didn’t get a photo of him – but we’re going into Porto again tomorrow, so you never know… 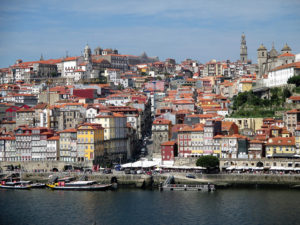