Skip to content
The New Motorhome – aka ‘The Classy Chassis’

After weeks of preps, we were still an hour late setting off from home. I could almost hear the old Elddis chuntering, ‘So what’s new?’ as we pulled out of the drive and headed for Herne Bay in Kent.

Always a dozen last-minute things to remember, despite the lists made. But this time we were doing our final journey with ‘Toad Hall’ – about to hand over old faithful in part-exchange for a brand new, gleaming Chausson 737. So the preps had been extra-intensive. Cleaning, polishing, off-loading non-essentials, packing new purchases, not forgetting some basic foodstuffs – although this time I didn’t plan to do much cooking during our few days away.

After a light breakfast and a two & a half-hour drive, we reached Herne Bay at 1pm. A smiling welcome from Shane Catterick at TC Motorhomes – we’d arrived at last! – and coffee and biscuits while we went through the paperwork.

And then – tra-la! – our first sight of the new purchase. Ever so slightly different from the model we’d seen under the NEC lights back in February. Grey cab, white body and navy trim – very smart. But what astonished me was discovering a drop-down double bed over the lounge area – I hadn’t realised that was included. This in addition to the two full-size single beds to the rear – singles, may I add, which lift up on sprung hinges to reveal oodles of storage space beneath…

And did I mention the bathroom with shower cubicle? The full-size fridge and the TV?

We couldn’t wait to start transferring our stuff to this new palace-on-wheels – but wait, we had yet to discover how this sophisticated vehicle actually worked.

We paid attention, honest we did, but there was a lot to remember – from security locks to alternate power sources, via the heating, lighting, water, and gas. Much of which was controlled by a natty little touch-sensitive panel with lots of cute little icons…

Hmm, well, we’d sort it out eventually. But something was missing – the sim-card belonging to the sat-nav. A good thing we’d planned to be in Kent for a few days, as we’d have to return for the sim-card on Friday.

Afternoon was wearing on, and after more coffee and biscuits we finally started transferring our possessions. Boxes of it. Stuff appeared that I hadn’t seen in months. ‘Where did that come from? Why did you bring that?’

Tools and sun-loungers began to do battle with essentials like bedding, cups, plates and food. Food in fridge – okay. Cups, plates & glasses? Ah.

Should we have requested plate and cup racks? Don’t know – they were standard fitments in the Elddis, but clearly not in the Chausson. Well, there was a genius pull-out rack beside the fridge – perfect for tins, bottles, spices – but maybe not for plates? The rest was pushed in anywhere, ready to be sorted once we arrived at our place for the night – a Caravan Club campsite about 20 miles away.

Why so far? Well, it was close to Leeds Castle – thought we might visit – and we had plans to see my cousins the following evening for dinner at a nearby restaurant.

By the time we arrived, the sun was setting in a gloriously red sky. Just enough light to find the water point and our designated pitch. While Capt Peter sorted the electrics, I found the duvets and pillows and made up the single beds. While waiting for the kettle to boil, I resurrected the pans and tried to make sense of the kitchen storage. Those plates were still bugging me.

‘Blow that,’ Capt Peter declared, ‘we need a drink!’ It was too late for naming ceremonies, with bubbly over the bonnet – besides we were starving, not having eaten all day.

As he opened the red wine, I set the spaghetti to boil and looked in the fridge. ‘What did you do with the Bolognese sauce?’

‘No.’ I cast my mind back, remembered decanting a panful of sauce into containers for the home freezer, and setting aside a double portion for this evening. But did I set it aside? And did it make its way to the Elddis fridge?

‘Yep,’ my other half confessed. ‘I put it in the freezer compartment…’

‘Well, there must be something we can have…’ (Opening of fridge and cupboards in a fruitless search for food – actually not quite fruitless as he did find three apples, four oranges and two bananas.) ‘There’s no way I’m setting off from here in the dark, trying to find somewhere to eat…’

I topped up my glass and sighed, knowing there was stuff for sandwiches and not much else. Apart from this first evening, we’d planned to eat out. I considered the cooked spaghetti – perhaps mixed with shredded ham and cheese – and rejected it. 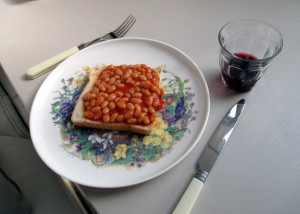 Capt Peter found the bread and the toaster. I found the tin of Heinz Baked Beans.

In the speedy satisfaction stakes, our meal of beans on toast accompanied by several glasses of Sainsbury’s merlot, got seven out of ten. Rounded off with a mug of tea and a Mars Bar each, another three points. Not exactly Michelin grade, but it was filling.

On the plus side, the beds were comfy. We slept soundly, and next morning raised the blinds to a bright, sunny morning. All was right with the world – and that evening, praise be, we’d be eating out.

All in all, it’s been a successful trip, with helpful staff at TC Motorhomes, fun with friends, some excellent meals (not counting the beans) and warm sunshine most of the way.

On Friday morning we bade a fond farewell to ‘Toad Hall’ – after sixteen adventurous years and lots of happy memories, it was an emotional moment.

On our way home, Capt Peter and I found ourselves recalling the occasional dramas. Like the time we were struck by lightning in rural France – it blew all the electrics. Carted away on a low-loader, and the two of us waving like royalty as we were driven through Biscarosse… And the time we had engine trouble on the Camargue, and bumped into Peter’s cousins – Captain Brian and Mrs Anne Roberts – at Aigues Mortes.

But now we’re back home with the Classy Chassis, I just need to solve the problem of the plates…