Skip to content
‘The Joys of the Open Road!’

Capt Peter has been on the move ever since he jumped into his pedal jeep at the age of four and decided to go to Leeds. He only reached the outskirts at Kirkstall traffic lights before being picked up by the cops, but he’d managed six miles of mainly downhill racing. What’s more, to add to the trip’s success, he was driven home in a police car.

That his parents took the pedal jeep away until he was too big to get into it was a bit of a blow, but he still insists he wasn’t running away. Simply curious to see ‘Leeds Road’ and where the road would lead…

Despite the lack of wheels, he continued to wander at every opportunity. No one was surprised when, a few years later, he fell in love with boats and elected to go to sea for a living – endless horizons there. Almost forty years later, when he gave up world-wide seafaring for a shore-based job in Southampton, I was not surprised when he said he wanted to carry on travelling for pleasure.

He’d seen many ports around the world and an awful lot of sea. I’d been fortunate to travel with him when our children were young, but there’d been little opportunity to do the tourist bit. And, as he pointed out, we hadn’t yet had chance to explore the land.

‘What do we know of Europe?’ he asked. ‘And our own country, for that matter?

I had visions of long weekends in nice hotels. ‘Good point,’ I said, forgetting that for him, hotels were associated with long-haul flights, uncomfortable beds, and joining ships after not enough sleep.

‘So how about buying a caravan and taking off to explore?’

I stared in disbelief. ‘No.’

Having once seen a caravan turn over on a downhill stretch of the A64, I was adamant I’d never have one. I loved the countryside, but as for camping – not my thing. My one experience was a school trip to the Lake District – sleeping in a tent, with army-style latrines and the only running water a nearby lake.

‘Well, how about a motorhome?’ Capt Peter went on. ‘A home on wheels – with all our own facilities aboard?’

That sounded better – marginally. Far from convinced, I agreed to give it a whirl. ‘But let’s hire one first,’ I said, ‘then we can see how we get on…’

So that autumn off we went for ten days in a 6-berth motorhome. Despite its size, it seemed awfully small to me – nevertheless it boasted a small kitchen and dinette, a decent bathroom and large rear lounge. The seating converted to an oversized double bed with plenty of leg-room (I’m tall, and Capt Peter is 6’2”) so I was praying we’d be comfortable.

From our home in Hampshire we headed towards Salcombe in Devon – and a campsite on the cliffs near Hope. No doubt the choice of location was significant. But that evening, with the sun well down and night approaching fast, I was feeling nervous. By the time we’d completed the formalities at reception, it was time to eat: something simple made in advance, followed by a supermarket pudding.

Later, preparing the bed for the very first time, I was cursing away, wondering what the hell I was doing, going to bed in a field in October. Whose bright idea was this, anyway?

Capt Peter forbore to reply. Earlier, he’d been elated by the prospects ahead of us – and waxing lyrical about the views from the cab.  It was so much higher than a car, and great that we could see over hedges. 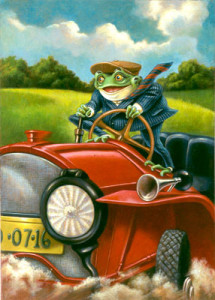 I said, ‘You sound like Mr Toad, when he stole his first motor-car – “Oh, the joys of the open road!”’

‘Damn right,’ I muttered, studying the map. And again, ‘Damn right!’ as I swore and cursed over my first attempt at making a motorhome bed.

But – surprise, surprise – the bed was comfy. One duvet under us, one duvet over – cosy as a nest, and enough space to be friendly or not, depending on one’s mood.

Next morning, after an excellent night’s sleep, Capt Peter got up first and made me a cup of tea. He raised the blinds before climbing back into bed. ‘Now then, Mrs Ratty – how’s that for a view?’

I pulled myself up to have a look: rolling fields to the right, and cliffs to the left. And beyond the cliffs, a sunlit sea…

This motorhome lark began to look good. And as the days went on, it got better and better. Campsite showers took a bit of getting used to – I’ve always viewed strange showers with suspicion – but a pair of ‘Crocs’ solved that little problem. In short, by the end of our ten days away, I was sold.

A couple of months later, we bought our very own palace-on-wheels.

We named it ‘Toad Hall’.