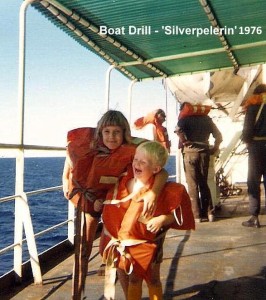 Have you ever done it? According to the Guardian, more and more parents are taking their children on extended holidays – time-out, lifestyle-changes or whatever. They mostly involve months spent touring other countries, getting back to nature, and legally home-educating the kids.

I guess parents have to jump through hoops to get that kind of permission. Nowadays even taking an extra day off for holiday reasons is likely to be refused – and parents can be fined for not getting permission beforehand.

These rules applied when my children were at school, but then they didn’t seem so strict. When Captain Peter and I took our two children away to sea – usually needing to leave a couple of weeks before the end of the summer term – there were pursed lips, but no refusals. We did it a few times between 1976 and 1986. Of course, I promised to ensure that our children, Louise and Scott, with five years between them in age, would be given some lessons while away. 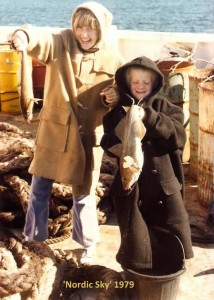 Keeping up with reading and writing was easy enough, and since they were often on the bridge, viewing the charts and asking questions, you might say they were learning some practical geography too. And of course, in a constantly working environment, they learned a lot about how ships function.

Creative work was fun. Things made from old charts and empty beer cartons had to be seen to be believed: forts, garages, dolls’ houses, castles, all stuck together with miles of sticky tape. Occasional birthday parties requiring fancy hats were a challenge, given the limited amount of raw material to hand, but we had fun doing it.

Saturday night was Quiz Night – aka a test on general knowledge. E.g. ‘What was the name of Long John Silver’s parrot?’* and, from Beatrix Potter: ‘What is the meaning of the word soporific?’

Cards, darts and dominoes were perhaps not approved subjects on the usual school curriculum, but pretty good for mental arithmetic and observation. Louise & Scott rarely won – learning something about failing without tears – but re darts, the chaps had 8-year-old Scott all lined up for a harpooner’s job on a whaling ship! 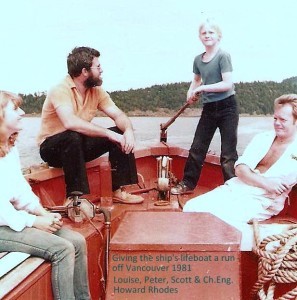 Both kids travelled with us from the age of three, so two things were paramount. First, they had to be aware of danger. The ship’s side and engine room were forbidden areas, while the maze of steps and alleyways could be lethal in bad weather: ‘Remember, we don’t have a hospital on hand…’

The second most important thing was acceptable behaviour.  No cheek to anyone aboard, no tantrums on the bridge or in the bar, and respect for all concerned. In our private quarters they could be naughty – and sometimes were – but not with anyone else.

As parents, we were always on the alert, but with close to thirty people aboard there was generally someone to keep an eye on them if they strayed. Always a friendly voice to remind them of safety, or why something was not allowed.

Engineers, radio officers, navigators – each an expert on his subject, and happy to answer questions. At that time the officers were all male and British; while the crews came from distant countries: the Philippines, Hong Kong and Barbados. So the kids quickly learned – as children do – how to interact with other nationalities and backgrounds.

On a more conventional level, as they grew older we were able to utilise some booklets – primers, I suppose they were – from my own time at school. My parents had bought them to help with my 11+ exams in the late 1950s. One had basic maths problems, another tested use of English and grammar. They were rather like some of the ‘tests’ we see nowadays on Facebook! 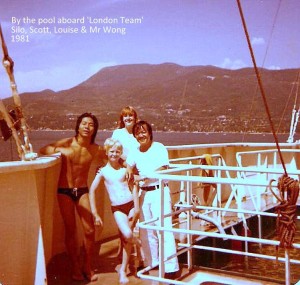 Our daughter Louise swears she learned more about the English language during those trips to sea than she ever learned in school – no doubt because at that time grammar was not being taught. Thank heavens it’s now back on the curriculum.

Although little of their on-board education was formal – after all, they were supposed to be on holiday for six of those eight weeks away – both children wrote illustrated stories of life aboard. Complete with photos, these were incorporated into their ‘diaries’, to show at school on their return.

Scott made a couple of trips later, but on our final voyage with both children – when he was eight and Louise had her 14th birthday aboard – things did not go quite according to plan.

It was the summer of 1981, and should have been an eight-week trip aboard a big oil/bulk/ore carrier, the MV London Team. Los Angeles, Vancouver, South Korea, Indonesia, back to Los Angeles and then fly home. In Los Angeles we visited Disneyland; in Vancouver, tested the lifeboat around the offshore islands; in Korea we toured temples with the ship’s agent, and went shopping in the midst of summer for winter clothes…

Winter clothes? Yes. Due to a change of orders in Pohang, we were virtually shanghaied for the next two months. That trip took us to Australia, and back to Europe via Cape Horn.

In mid-November, four months after joining the ship, we reached Rotterdam. A relief in one sense, but leaving brought tears as the children said goodbye to shipmates who had become like family.

From a small village school the previous July, that November Scott started a new and bigger school as a new boy. It was a hard year for him. While Louise – rejoining her old classmates, but in a year preparing for GCSEs – found she’d missed so much formal education it was hard to catch up.

Both of them struggled, and I found it well-nigh impossible to help. So yes, it was a tough old year to follow. But interestingly, Louise had seen and learned so much about oil refineries during her trips to sea, she was able to correct the teacher during a lesson on world economics… 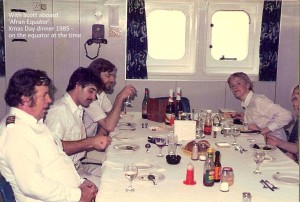 As a mother, would I do it again? Would I risk it? Probably. Would they do it again? I’m certain the answer is yes. Quite apart from the educational side of the experience, they got to spend months with their Dad while he was at work. And you can’t put a price on that.

At the end of the day, they are both at ease with people from all walks of life, Scott is a PhD engineer, and both he and Louise run their own successful businesses. So in the long run it didn’t do them any harm to miss out on some of their formal learning – and it bestowed a lot of benefits.

In many respects it was an education for me too – but most of all, looking back, it was fun.

So, have you ever taken your kids out of school? And if so, what was your experience?

*In case you didn’t know, the name of Long John Silver’s parrot was ‘Captain Flint’.