Skip to content
Gallipoli: The Landings 25th April 1915 – an extract 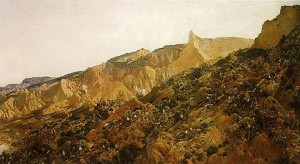 After sleeping fitfully for a couple of hours, he went up on deck. In the moonlight he made out the hulking shapes of other transports. The group of warships which had passed them at sunset had to be well ahead by now, poised and ready for the attack. His battalion, the 8th, would be one of the last to land. It was a daunting thought.

Time passed with dragging slowness. By three o’clock they were passing the southern tip of Imbros Isle, with possibly a dozen miles to go to the Peninsula. The moon was setting behind a thick veil of mist. Orders came from the bridge to extinguish all lights, and Liam reluctantly nipped out a cigarette. The men around him began fidget.

Beneath his greatcoat he was sweating profusely. In the greenish light of dawn, he could see the high, broken ridge of the land, make out the shapes of other transports around them, moving into line. In a whisper, someone asked the time. Almost half past four. Liam found himself longing to get there, for something to happen, anything break the tension.

It came a few minutes later in the form of a bright yellow light way to the south. A moment later there was a peculiar sound of knocking, isolated small-arms fire which rapidly became continuous.

They’d landed! The first wave was in there and fighting!

The whispers rushed over them like a sigh. Faces were suddenly smiling, fingers clenched on rifles, all eagerness to join the fray.

The knocking grew louder, brilliant flashes appearing from a point on the shore; a shower of rain made the sea boil on the starboard side. Surprised, Liam realized it was shrapnel falling. From one of the battleships close by, a thunderous explosion rent the air. He saw the gun’s recoil, the great curl smoke which followed, and wanted to cheer. Destroyers which had been close in to the beach began to come alongside the transport, ready to collect the next wave of men.

‘Must be our turn next,’ a man beside Liam muttered, ‘the jolly jacks are here with the rum.’ 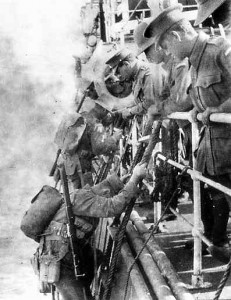 Shells were falling near the ship. The massive naval guns retorted; with a whistling scream a great fountain of water rose beside the old Clan MacGillivray making her roll and sag like an old woman. Liam staggered, the sailor beside him almost lost his footing, but saved the rum, handing it out with twice his previous speed. Liam downed his tot in a second, coughing as the spirit hit his throat and burned its way into his chest. He felt better for it, had cause to be doubly glad when their destroyer moved in alongside.

In the first rays of the early morning sun, her decks were like a scene from hell, littered with maimed and wounded, running with blood. Aghast at the numbers, he could not believe so many, so soon. Fear clutched. Waiting while the wounded were transferred was torture. He tried not to look, tried not to hear their cries so clear against the scream of the shells. The platoons took position, the practised routine of scrambling down the ship’s side and up the next set of ladders going without mishap. Tension again as the destroyer sped them towards the beach, men packed like toy soldiers on her decks. Down rope ladders again but this time into the boats. 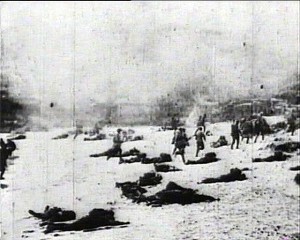 They were about two hundred yards from the shore, shrapnel bursting around them; an oarsman was hit and lost his oar, another fought to take his place, pulling out of time with the rest. ‘In, out — in, out,’ their officer yelled, just like a coxswain in a boat race. Liam wanted to laugh.

The boat grounded on shingle. ‘Right, chaps, this is as far as we go – everybody out!’

Overboard into four feet of water, he gasped with the shock, holding his rifle up and clear, determined not to lose his footing with the heavy pack on his back. On a narrow strip of beach he saw huddled shapes like bundles of rags and wondered what they were; then bullets danced in the sand and more fell. Something sang past his ear, the sea was suddenly hissing around him; a man with two stripes turned at the water’s edge, urging his platoon on. Liam saw it was Ned and struggled to join him as a shell burst on the rocks ahead. He had time to register the blinding flash before the shock wave knocked him flat.

Deafened, half-drowned, aware of nothing more than a need to reach the shelter of those cliffs beyond the beach, he rolled, cursing the pack. A man behind caught his arm and dragged him clear.

Liam looked for his old mate Ned and could not see him. From the shelter of the cliffs he scanned the beach with mounting panic. Wallowing at the water’s edge was a body; soldiers from another boat tripped over it, revealing the stripes on the sleeve. It was Ned – had to be Ned. Shedding his pack he staggered to his feet, only to be grabbed by the man beside him. What was he thinking of, the stranger wanted to know; they had to get off the beach, leave casualties to the stretcher-bearers.

‘There aren’t any bloody stretcher-bearers. And he’s my mate, for Christ’s sake – I can’t just leave him to drown!’

He leapt forward, and to his credit, the other man followed. Between them they hauled Ned out of the red waves, getting in the way of the next boat-load coming ashore. Liam cursed them as he tried to cut Ned’s pack free. He was alive but only just, blood pumping from a wound in his neck. Amidst a hail of shrapnel they dragged him to shelter.

His companion’s urgent demand as to what they were supposed to do now, went unheeded for the moment. From the back of his numbed mind, Liam recalled instructions dinned into each of them on exercise.

‘Report to the nearest officer. We have to remember the dead man’s position and report.’

‘Sod that! We’ll be dead ourselves if we don’t get off this bloody beach. God knows what’s happened to my mob – they’ll be halfway to Constantinople by now. Come on!’ The stranger started to scramble upwards, then looked back. ‘What the hell are you doing now? Let’s get moving.’

Liam was searching Ned’s pockets. ‘There was a letter he wanted me to post…’

‘In this lot?’ He slithered down to Liam, grabbing his arm as he found the wet and crumpled letter, and dragged him upwards. ‘Get moving, you stupid bugger, before you get us both killed.’

Numb with shock, his mind operating on a different plane altogether, Liam was only vaguely aware of scrambling upwards amongst a group of gasping, cursing men.

‘Where the hell are we?’ a voice demanded from the left. ‘This ain’t the place we was supposed to be. Flat, they said – they said the sodding landing place was flat!’

‘Tide rip,’ somebody else gasped, ‘took that first lot north, I reckon. Should be over there, where that bloody fort’s firing from.’

For the first time, Liam looked down the way they had come. The narrow strip of beach below was still in shadow, curving from a peaked headland on one side to a smaller one to the south. From the promontory beyond came a series of flashes which indicated the source of those shells exploding with such deadly accuracy over boats still coming ashore.

From the sea, two destroyers were pumping shells at the fortress in an attempt to silence the guns; a heartening sight, but it did nothing to halt the machine-gun fire coming sporadically from above.

Just below the crest they came across another group. Some bore the red and white shoulder flashes of Liam’s battalion, but none were of his platoon. Where were they? With a flash of panic, he knew they could all be dead.

With an effort, he quelled the thought. Along these cliffs they could be anywhere.

An officer of the 9th was trying to organize odd members of other battalions separated in the chaotic advance. He kept saying it was important to reinforce the line, while Liam wondered how he could know where the line was. Impossible to see what lay ahead, while below it was all too clear. Men were still landing, still being fired upon. The dead lay huddled in a red sea, among discarded packs on the shingle. Seeing the terrible numbers, Liam thanked the man who had dragged him off the beach.

Half-hidden by the thorny scrub, working their way up in groups of three of four, were scores of other men. Every now and then one would fall. With a shock, he realized they were being picked off by snipers hidden amongst the dense, low-lying vegetation.

An officer was talking quietly, rallying the scattered force for a concerted attack on the machine-gun post above. As they fixed bayonets, Liam recalled manoeuvres, the rushing and yelling before the carefully balanced thrust into the gut. When it came the reality was nothing like that.

Rocks crumbled underfoot as they climbed like beings possessed. Liam stumbled into a hidden trench, almost on top of a Turkish soldier desperate to escape. For a second he hesitated. The man levelled his rifle and Liam went at him awkwardly; there was no room for the balanced thrust, the bayonet shuddered as it went in and the Turkish soldier fell forward, his scream ending in a froth of blood. Shocked, Liam jerked back, narrowly avoiding a bullet. A sergeant silenced that man, while others shot at the retreating enemy.

The men were jubilant, putting forward a dozen ideas as to what their next move should be. The officer thought they should man the gun and use it against the Turks; but no one knew how to operate the one they had captured, so it had to be disabled.

Liam drank from a Turkish water bottle and tried to avoid looking at the dead. Beneath the constant whine and crump of shells to the right, his ears were still ringing from that explosion on the beach. It seemed an eternity ago; yet in little more than an hour he had watched his best friend die, and killed a man at close quarters.

Shattered and exhausted, his companions were almost unrecognizable as the smartly-uniformed troops which had mustered on the boat-decks before dawn. No one was smiling now.