I’ve loved the sensation of lifting up, up and away, ever since my first job with an independent airline. As a young reservations clerk sent off on a ‘familiarisation trip’ to Schipol Airport, Amsterdam, I thought I was the luckiest 18-year-old on the planet.

Leaving Leeds/Bradford Airport, spying the green Yorkshire Dales in the distance, trying to spot our house as we banked east for the coast. Then we were above the cotton-wool clouds, and twenty minutes later England was behind us; the North Sea below glittering like silver, the specks of ships growing bigger as we approached the coastline of Holland…

It was all in the journey – out in the morning, back in the late afternoon – no time to visit the city. But it was the beginning of a love affair with flying. In those far off days it seemed so sophisticated, jetting off to distant destinations. Trains and buses were so past tense – I was heading for the future. 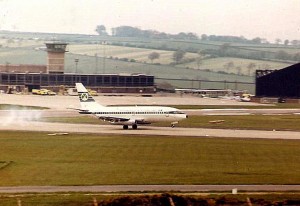 Later, I moved to Aer Lingus, Irish Airlines (hence the photo taken at Leeds/Bradford  c1970.) But in the years since I’ve flown to many places around the world, always eager to get there, always excited at the thought of exotic foreign lands.  Capt Peter has been on the move all his life, but he hates flying. Not the fear of it, just the tedium, since flying for him has meant decades of jetting off to join ships in various parts of the world.

Holidays for us as a family usually began with a flight to some foreign port – again to join a ship. And what did we see? Mostly we saw the sea… but we also enjoyed the experience of travelling slowly across the face of the earth, feeling the daily change of climate as we moved from chilly northern climes into warmer tropical seas.

We didn’t discover Europe until more recent times. Having moved to a shore job on the south coast in 2000, Capt Peter knew he couldn’t live without travelling.

‘You know,’ he said one day, ‘we’re really handy for the Channel ports. Why don’t we buy a caravan – tour the Continent, discover all those places you’ve talked about…’

Fear gripped my throat – I’d once seen a caravan turn over and take the car with it. Horrific. So his next suggestion was a motorhome. I wasn’t keen, but agreed to ‘test-drive’ one first. We hired a smart vehicle for ten days, and zoomed off westwards.

I didn’t expect to like it – and arriving at dusk to a small campsite above the Devon cliffs was daunting. I remember cursing away as we prepared for the night. ‘What on earth are we doing?’ I demanded. ‘Going to bed in a field in October?’

But after a great night’s sleep, as Capt Peter raised the blinds and presented me with a cup of tea, I saw the view over the cliffs and out to sea…

I was hooked. So we bought the motorhome he was longing for. Since then we’ve driven all over France, Spain and Portugal – often visiting friends along the way.

No need to think hard for the memories to come flooding back: The sleepy villages of France, their history advertised by sculptures on the roundabouts: knights with lances near Falaise; statues of black bulls in the Camargue; miners pushing trucks of coal at Alès in the Cevennes. And on the Camino Frances, an occasional bronze pilgrim forever walking the road with his staff and scallop shell…

Heading for a road across the Pyrenees on one trip, we found the pilgrim route into Spain almost by accident. St-Jean-Pied-de-Port, an ancient market town with pink and grey medieval walls, was bright with noonday sun and bustling with walkers. Many carrying the staff and scallop shell – the emblem of St James, the Apostle.

Santiago de Compostela was 800 km away across northern Spain – the pass ahead a stiff climb of 1400 metres. We would be driving: I looked at those on foot in their sturdy boots and admired their dedication. 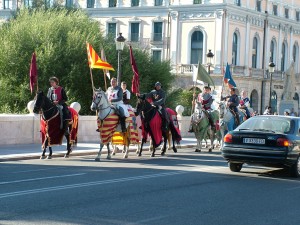 We were heading south-west, through Burgos, the town of El Cid – Rodrigo Diaz. The day we arrived, the townsfolk were celebrating the annual fiesta, dedicated to the man himself. At the traffic lights, a most unexpected sight had me rubbing my eyes in disbelief – half a dozen knights on horseback, waiting for the green light…

A day later we were moving on. High on the plateau in central Spain, ancient farmhouses stood on the skyline, their ochre walls and roof-tiles the colour of the earth from which they seemed to have grown.

Friends had said we must visit the ancient university city of Salamanca, with its fabulous square and grand architecture – we did and were enchanted by the place. We moved on into Portugal, through mile after mile of cork forests. The rich red of their stripped bark echoed in the hides of cattle grazing in the clearings. 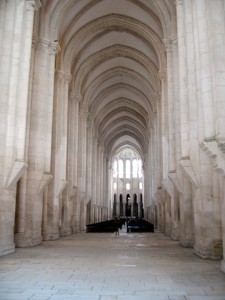 We came to a small town with a monastery in the square. To our astonishment, behind its ornate Portuguese exterior stood a perfect Cistercian church, its vast space uncluttered by saints or chapels. The great nave with its soaring columns transported me at once to the great ruined abbeys of Yorkshire.

‘This,’ I whispered, ‘must be what Fountains, Kirkstall and Rievaulx were like before the Dissolution…’

‘Jervaulx and Byland too…’

It seemed so strange – a minor miracle in its way – to find this echo of the desolate Yorkshire abbeys in a small town – Alcobaça – in mid-Portugal.

If we found food for the soul in that small town, there was nourishment for the body too. Great food, and, from a nearby supermarket we picked up a 5 litre box of local red wine for 5 euros. Probably rubbish, we said, but worth a try. Turned out to be one of the best reds we’ve ever tasted.

But the lonesome trail takes time. Two weeks to cover ground a plane can do in two hours. So we still fly occasionally. Last autumn it was a week in Lanzarote. Glorious – until the return to Bournemouth. Hurricane hit just before landing – diverted to Birmingham, we finally arrived home at 0800 – having been up for 24 hours. Home at last, to find the climbing rose over the front door – the one we’d been meaning to prune for months – had parted company from the wall, barring our way into the house. Utterly bizarre – there we were, severely rose-pruning before we could get the luggage in…

Two weeks ago we went to the Algarve – flying again. A lovely week – followed by drama. Our hire car was broken into while we stopped for lunch en route for our flight back. House keys, car keys and address book were in the one stolen bag. It’s been a challenge dealing with that. Other missing possessions – like my camera – are still springing to mind.

So is it telling us something? Should we ignore the magic carpet ride and stick to the adventure of the open road?

Well, maybe. Except there was that time in France when we were struck by lightning – it blew the whole of the motorhome’s electrics. It took a low-loader and five days to get that little problem sorted out. And then there was the time we had mystery engine trouble at Monet’s garden in Giverney – had the old Peugeot discovered its spiritual home at last, and simply refused to budge?

Not sure – but we’ll continue to travel in hope. The lure of the lonesome trail is too powerful to ignore.

And so is the sense of freedom. That moment when we reach the Tesco roundabout, and say, like a pair of truanting kids: ‘That’s it – we’re away – they can’t get us now!’