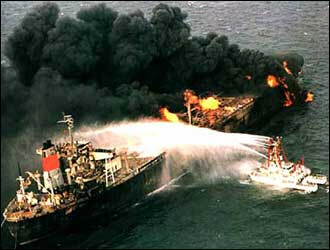 The world’s need for oil has played a big part in my life – albeit at one remove. And that experience underpins the modern half of my WW1 novel, Liam’s Story.

Just as I was approaching the final few chapters of its predecessor, Louisa Elliott, set in 1890s York, I received some shocking news.

It was September 1986, and my husband Peter – a tanker captain – had been away for about six weeks. His ship was carrying a cargo of jet fuel from Indonesia to Bandar Abbas in Iran. Quite safe, he informed me; outside the Gulf war zone, so no need to worry…

At that time, Saddam Hussein in Iraq and the Ayatollah Khomeini of Iran were on opposing ideological sides, each determined to overthrow the other. After years of conflict on land, Iran had started attacking Gulf shipping in an attempt to damage Iraq’s oil revenues, and before long each side was firing on oil tankers in a bid to deprive the other of trade.

These damaged ships were regularly featured on television news, so yes, I was concerned. And thoroughly alarmed a week or so later, when Peter phoned to say his ship had been bought by the Kuwaiti National Oil Tanker Company. The ship’s last cargo was in support of Iran’s military efforts, but Kuwait, officially neutral, had now purchased the ship to export oil on behalf of the other side.

The new charter was to transport highly flammable kerosene, jet fuel and petrol from Kuwait to Karachi in Pakistan. It was to be a weekly journey through the narrow Straits of Hormuz, where Exocet missiles fired from small boats were the preferred means of halting this lucrative business.

Peter said he hated putting innocent merchant seamen’s lives at risk. Nor did he approve of transporting millions of dollars’ worth of oil, in order that two megalomaniacs on opposing sides could fund their bloody war of attrition. But at that time he had little choice but to carry on. The shipping industry worldwide was suffering, and a job he’d applied for – piloting ships in Shetland – was still on hold. So he stayed with Endurance – never was a ship more aptly-named! – making the weekly journey between Kuwait and Karachi for four more months.

I tried not to dwell on the dangers he was facing every day in the Gulf, but Kuwait to Karachi and back was a two week round trip, with the Straits of Hormuz equidistant between the two. Every Sunday they ran the gauntlet of gunboats and Exocet missiles. ‘Reciting our Sunday prayers,’ he called it.

If there were few good things to be said, at least letters arrived regularly. While praising his officers and crew, Peter mentioned very little of the true situation in the Gulf. The disturbing things he was seeing – crippled ships, small boats on the radar at night, and being buzzed by military jets by day – were censored before he set pen to paper. If he took photographs, I never saw them. (The picture attached is one taken in 1987, and downloaded from the internet.)

Peter described only one incident, and that was his brush with an Omani gunboat.

Oman, at the southern end of the Gulf, was neutral in the conflict to the north, and ships were supposed to keep clear of Omani territorial waters. But Peter was having none of that. Taking the ship through the danger zone by night, he kept close in to the Omani side of the narrow Straits of Hormuz.

The night they were approached by the gunboat, he’d no idea who or what they were. Blinded by lights, his hand hovering over the emergency alarms, for several terrifying minutes he was expecting the worst. When the Omani officer hailed him, demanding his name and the ship’s details, relief made Peter curt with his reply. Told that he would be reported for contravening international agreements, he said, ‘Go ahead – report me. It won’t make any difference. I’ll be following this course while ever I’m on this charter!’

Nothing came of it, but I think my husband might have preferred to be arrested with all furore that would have caused. The opportunity to rant in front of journalist or two would have pleased him mightily.

As for me, by and large I avoided watching the television news, simply because so much of it was bad – bombs going off in Northern Ireland, famine in Africa, war in any number of places around the world. It was all so horribly the same, and I’m sure the producers of TV news were aware of it. For them, missiles hitting ships in the Gulf made a dramatic change. Much was made of every incident, journalists with little marine knowledge spouting inaccurate details with all the gravitas of experts. It was infuriating, but at least it enabled me to vent some rage at the TV. Mostly I kept my feelings buttoned up, preferring to read details in the less sensational prose of the Yorkshire Post.

Looking back on it now, all these years later, it seems little has changed. I can relate my small experience to the wives and families of soldiers serving today in the Middle East. Many news reports are of localised incidents, but for those with loved ones out there, each one strikes fear into the heart. And that fear can make itself felt in many ways.

Ultimately, my feelings found their outlet in a second novel, Liam’s Story, but at the time I kept my sanity by focusing on finishing the first one, Louisa Elliott. For me, one effect of burying the stress appeared physically the week Peter came home. Fortunately for vanity’s sake it was easily covered and later grew back, but in just a small spot, about the size of a fifty pence coin, my hair fell out.