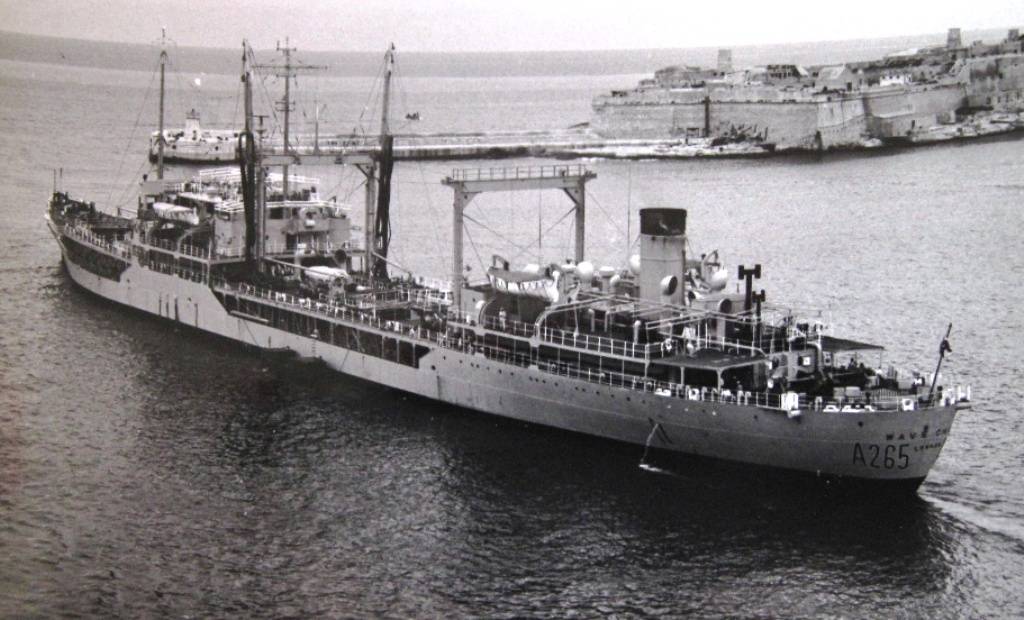 My first sight of the RFA tanker Wave Chief was just a dark grey shape on a grey sea as she came into Portland, Dorset. I’d travelled down to be with my husband during his few precious days off, and I had some joyful news to impart: I was expecting our first baby.

My husband Peter was 2nd Officer at the time, and when he shared the news aboard, the Captain gave him another night off. Wave Chief, he said, would be leaving at dawn to rendezvous with a Royal Navy exercise in the Channel; but Peter could join the ship by helicopter – that is, if he was prepared to be winched down onto a moving ship in less than flat calm seas…

Good news or bad? Just what was the Captain trying to do? If my heart was in my mouth at the very thought, Peter was delighted. Another night ashore, and an exciting trip out to the ship on Monday morning…

As we said farewell in a grey February dawn, I kept my fingers crossed. Watching the helicopter leave, I was praying he’d be safe even as I wondered when we’d meet again. After the Royal Navy exercise, Wave Chief was heading up to Rosyth in Scotland; in another month or so she’d be leaving the UK for a long posting to the Mediterranean…

To my surprise and delight, a week later Peter called me from Rosyth to say I could join him in Malta. Even better, I’d been granted permission to travel out with the ship.

My first trip to sea! Overjoyed, I couldn’t wait to pack. My parents were understandably anxious – but I never had a moment’s doubt. I’d be fine, I said, waving all the concerns aside. It was mid-April and my 22nd birthday as they saw me off on the train from Leeds to Edinburgh. I’d never travelled north before, and the rail journey up the west coast main line – through Cumbria and over the Ribblehead Viaduct – was spectacular. It was an adventure, and I was enjoying every minute. Overnight in a hotel – very grand – and next day a taxi over the Forth road bridge to the Royal Navy dockyard at Rosyth.

I don’t know what I was expecting, but Wave Chief was nothing like the elegant Port Line ships I’d visited during Peter’s early days at sea. She was an elderly, no-frills vessel built for work. Everything was standard Navy-issue grey, the accommodation small, with narrow alleyways and steep stairs, pipework and cables exposed along every deck-head. Peter, I noticed, was walking around with his head permanently bent.

Not exactly a cruise ship, and if Mum and Dad had seen my home for the next two weeks they’d have had a fit. But I found myself smiling, reminded of the ship in Evelyn Waugh’s novel, The Ordeal of Gilbert Pinfold, in which a voyage to the Far East becomes a nightmare for the delusional hero. Scanning my surroundings I realized just how easy it would be for a paranoid character to imagine he was hearing plots against him, the voices conducted down these endless pipes and cables.

Peter chuckled when I told him, assuring me it wasn’t possible. Just as well, I thought, as I settled myself that night into our cosy bunk. Next morning it felt strange to be rolling as we left the Firth of Forth, and I admit to feeling rather queasy for a couple of hours. Peter recommended fresh air, so I went out on deck, enjoying the salty breeze as I fixed my eyes on the horizon. Queasiness abated. Food was also recommended, so I ate lunch and retired afterwards for a na

Having found my sea-legs, I ventured out onto the afterdeck, feasting my eyes on the dramatic coastline of north-eastern England. Such a thrill to see Whitby in the sunset, its ruined abbey perched high on the cliff-top, and, further south, the lights of Scarborough twinkling in the dusk. Places I’d holidayed with my parents, but everything looked so different from the sea.

It was such heady delight, I had to keep pinching myself to be sure it was real and not a dream. Ever since I’d set foot aboard the Port New Plymouth in Hull some years before, I’d wanted to be at sea with Peter. And now I was, but I hadn’t expected such views. I wished it were possible to stop the ship, do some drawings – a painting, even – but the old tanker was ploughing the waves at a steady rate of knots, leaving those headlands etched on my memory.

At midnight, Peter left our cosy bunk to do his watch on the bridge.  Next day we were into the Channel, the white cliffs of Dover rising and falling on one side, the coast of France lying low on the other. In that busy waterway, shipping was on every hand. Peter, busy on the bridge, was watching movements, plotting courses, while I was having the holiday of a lifetime. When we were alone, I kept hugging him, needing to feel that he was real too.

Around Ushant and into the Bay of Biscay, the seas were pretty rough, with a full gale blowing and green waves rolling down the foredeck. I was fine, which amazed everyone, including me. But then, past Cape Finisterre, the seas calmed, the sun shone, and the next day found me sitting out on deck with my oil paints. I’d brought them along, intending to capture some of Malta’s light and shade, but when the Captain heard that, he asked if I’d paint something for the ship’s bar. 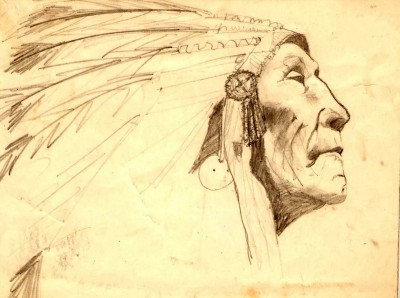 A native American chieftain was the commission – to illustrate the ship’s name. So, having done the drawing and got it approved, that afternoon I was busy for a couple of hours, painting a portrait-sized picture on a board prepared by the ship’s carpenter. I still have my original drawing but sadly no photograph, and what happened next to the painting remains a mystery. Overshadowed – and mentally erased, I’m afraid – by a crisis just a couple of days later.

Gibraltar before dawn was no more than a scattering of lights on the horizon, Morocco a jagged line of mountains close at hand. Disappointing not to see the Rock, but once through the Straits we were into the Mediterranean – the last leg of the voyage. All the Maltese crew were bubbling with excitement – talking about their families, the places I must see, the people they wanted me to meet. I was just as excited, full of anticipation for what lay ahead.

Just thirty hours from Malta I was out on deck, dreaming of the next few months – and mentally planning paintings full of light and shade – when the ship began to turn. Hearing a shout from the bridge, I went up to see what was wrong.

‘Just had fresh orders,’ Peter said. ‘Bit of a crisis apparently – we’re going back to Gib.’

Hard to say who was more disappointed when the situation became clear. Another Fleet tanker had developed serious engine trouble on its way to the Falkland Islands. She’d limped into Gibraltar, but the repairs would take time and the Falklands couldn’t wait for that vital cargo of oil. The solution was to swap cargoes. Wave Chief would go south, while the other would go on to Malta when her repairs were complete.

There was nearly a mutiny aboard. The Maltese crew hadn’t been home for almost a year, and no one knew how much longer they would be away. A bitter disappointment for them, and also for Peter and me. After just two weeks together, we’d soon be saying goodbye. But as the Captain remarked, he didn’t think I’d fancy having my baby at sea, especially as the 2nd Officer – my husband – was also the ship’s Medical Officer.

Lightly said, but the truth was that I would be flying home from Gibraltar.

It was a lesson in the first rule of shipping: if things can change, be sure they will. Our parting was made worse by not knowing how long it would be before Wave Chief returned to the Mediterranean. The best guess was a couple of months, which didn’t seem so bad. I could fly out to Malta, Peter said; we would still enjoy some time out there. On that promise, we had a wonderful evening ashore – seeing the Rock up close, which neither of us had expected – but next morning it was brave faces, and then farewell and bon voyage.

It was to be another five months before Wave Chief returned, just as our baby daughter was being born in Otley, West Yorkshire. She was a month old before Peter and I met again, and it was to be three more years before we made another trip together. But on that occasion we went off to sea as a family…