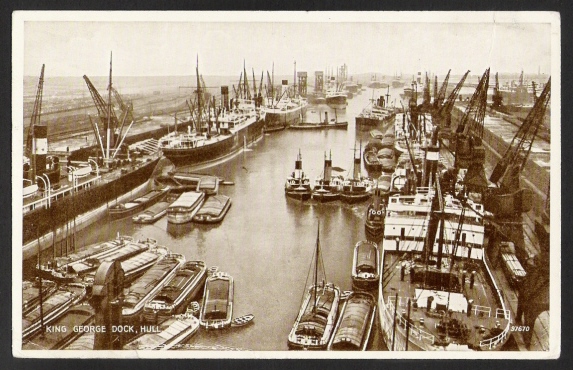 My first visit to a ship, and Hull’s Hedon Road was grim. The prison faced the deep-sea docks, both sides separated from the outside world by high brick walls. Watchtowers punctuated the skyline on one side, great cranes the other, and the dock-gates were manned by police. The only way in was with a pass for the right ship. Fortunately, ours had been arranged beforehand.

Once through the gates, the place seemed deserted. Beyond great warehouses we could see some ships, but the cranes were still and nothing was moving. We were all disconcerted, having expected a bit of activity, cargo being unloaded, people going about their everyday tasks. We saw no one. It was like a set for one of those scary science-fiction dramas of the time – Quatermass, perhaps, or an early Dr Who – where the population has been wiped out by a mystery virus, leaving just four people to sort it out and save the world. Mr Roberts looked anxious, Mrs R and I minced along in our best shoes, and even Peter’s young brother Colin, who’d talked virtually non-stop on the train, was suddenly quiet.

Then, with joint relief, we saw the ship, its black-topped red funnel, white superstructure and Pacific grey hull immaculate against rust-streaked cranes and sheds. Like a millionaire’s yacht compared to the other vessels berthed nearby. MV Port New Plymouth, named for a little port in New Zealand, had an elegant prow and classic stern, where its port of registry, London, was lettered in black. A red ensign stirred in the slight breeze, and in that moment the sun came out, making reflections in the waters below.

We quickened our pace, reaching the ship as Peter waved from the deck, grinning from ear to ear as he bounded down the gangway to greet us. In his best uniform he looked tanned and fit and incredibly handsome. And of course I hadn’t seen him for four months, which heightened everything. If I’d been dry-eyed when we parted, I was full of emotion in that moment of reunion. Words were beyond me – all I wanted to do was hug him and cry. But that was hardly the thing in front of the parents, so I fished about in my bag for a handkerchief while the others laughed and joked and made the kind of small-talk that greetings after long absences seem to demand. 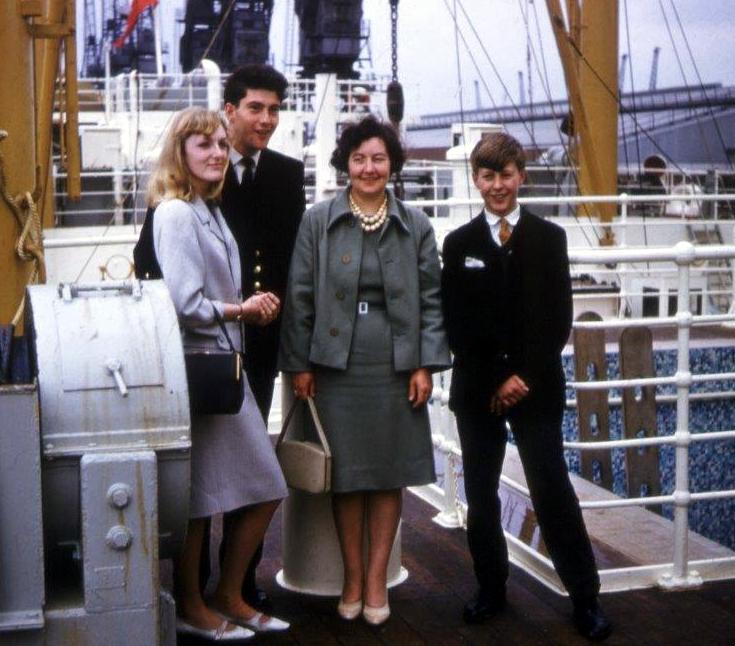 Peter escorted us aboard, explaining why no one was working. It was Saturday, so most of the officers and crew had gone ashore, leaving him in charge. He showed us round, so proud of everything, and so happy to see us, it was wonderful.

The ship was in some ways as I’d imagined it from his letters, but also completely different. His cabin – shared with three others – was small but neat, with polished wooden bunks atop chests of drawers, cupboards for clothes and desks for writing. Every cabin was designed to make the most of space available, and every surface gleamed.

We saw the bar and dining saloon – beautifully fitted out – and looked into the spotless galley. Up a couple of decks past the senior officers’ accommodation, and up again to the bridge. In the chartroom were ocean charts, the Admiralty Notices to Mariners from which they were corrected, and some of the work that Peter had been doing.

I was fascinated by everything, by the different levels, the masts and lifeboats, cabins and corridors, the maze of inner and outer companionways. Most of all by the fact that it was a ship, a real ship, carrying cargoes around the world, promoting trade, linking people as well as countries. I found it incredibly exciting. Standing there on the bridge of the Port New Plymouth I longed to stay, to feel the surge of water under the keel and know there was an ocean to cross. I looked at Peter and saw that he was part of it, and always would be. Past and future came together in that moment, all mixed up with love and longing, and a sense of adventure. I looked at him and understood what he was about: more than that, I wanted to be with him.

If there was a definable moment, that was it. It didn’t matter that his parents were with us, that his young brother was demanding answers to a dozen questions at once – I looked at Peter and suddenly I was in love. The world was a beautiful place – even the dreary old docks had brightened up. He would soon be home, and then we’d have some fun. I didn’t think of the future in terms of marriage and responsibility – who does, at seventeen? But I had a sense of certainty that we would be together, that I would travel the oceans with him, see the places he saw, and share his life.

There were other ships, and more partings to come, but eventually, we did marry, and we did travel the world together. But not before a few rocky roads intervened…