In summer 2013, I had recently published the ebook edition of LIAM’S STORY when I went aboard SS Shieldhall for a trip to Cowes. Doug Brodie, then Shieldhall’s Vice-Chairman, came up to me and said that he’d just read it. Referring to an incident in the novel, he went on to say, ‘Oddly enough, in my younger days I met the Reverend Tubby Clayton…’

My jaw dropped. Doug had met the legendary chaplain? Lost for words I grasped his hand, aware that we were making a connection linking back to WW1.

When I found my voice the questions came tumbling out. Doug Brodie was not sure when or why, but Tubby Clayton had also founded the Seamark Club in the City of London, a home from home for Merchant Navy officers studying for their professional certificates at the nearby nautical college. Doug had twice had dinner with him while staying there in 1959 and 1962.

That this link with WW1 should be via the Merchant Navy rather than the armed forces was, for me, as astonishing as it was important.

LIAM’S STORY follows parallel events in two separate generations of the Elliott family. A modern sea-captain commands a ship transporting gas oil and aviation fuel during the first Gulf conflict – while his forebear, Liam Elliott, fights a different kind of war on the Western Front. After two months on the Somme, Liam is wandering aimlessly through the little town of Poperinghe. A chaplain – unnamed – stops to speak, and invites him back to Talbot House. In the novel it proves to be a pivotal moment in the young man’s life. 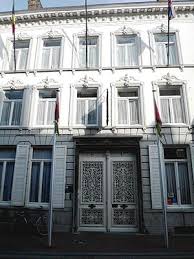 In the real world, Abandon rank all ye who enter here were the words pinned above Tubby Clayton’s doorway – a clear sign of his innate belief that all men are equal in the sight of God. Status, social or military, divides and can breed resentment – his aim was to break it down, to promote friendship and loving kindness by practical means. The ‘Everyman Club’ was a place to have a meal and a chat, to listen to some music or just sit quietly with a book. In the Upper Room, a chapel created from the old hop loft, prayers and services were held. Talbot House was an oasis of peace in a world gone mad.

Considering social and military attitudes of the time, Tubby Clayton’s beliefs were both visionary and revolutionary. But the wonderful thing is, he succeeded. This outwardly unremarkable man made a difference, transforming lives and saving the sanity of men who were fighting in hell itself.

So how did this army chaplain become involved with the Merchant Navy? Prompted by Doug Brodie’s reminiscence, I did some checking and found that Tubby Clayton had quite a history.

In 1922, he became Vicar of All Hallows by the Tower, in the City of London, and remained its priest for forty years. Meanwhile, in the wake of WW1, he founded similar clubs to Talbot House under the name of TocH – the signallers’ abbreviation – and travelled to British outposts across the world, promoting Christian principles of friendship and service.

With the outbreak of WW2, he volunteered again as a chaplain. But this time – probably as a result of his travels and his church’s proximity to London Docks – his mission was to the men of Britain’s Merchant Navy. Specifically, he was assigned to the Anglo-Iranian Oil Company – which later became BP. Throughout the war, Tubby Clayton travelled aboard their tankers to and from the Gulf.

In all its forms, oil was indispensable to the war effort – but it had to come by sea. That Tubby Clayton risked his life daily – together with MN officers and crew – is illustrated by statistics. Of the 93 Anglo-Iranian tankers plying the route from the Gulf to Britain during WW2 – mostly via the Cape of Good Hope – 42 were lost to air or submarine attack.

The work of merchantmen throughout WW2 has often been overlooked in the bigger picture of battles on land and in the air. And yet without them, this small island of ours would have gone under within weeks. In the present day, the need for oil still shapes the world in which we live.

In building faith and friendships, hope and goodwill, this amazing man did his bit. And he went on to continue his work amongst men far from home in the post-war years.

‘Tubby Clayton was also Vicar of All Hallows by the Tower. The Crescent was only just round the corner – and not far from the London Docks. It was said that Seamark had its origins during the 1930s Depression era – Tubby Clayton became aware of men who had come ashore to study for a ticket, had little in the way of resources and needed a cheapish place to stay for a few weeks. The impression was that from the house next door (8, The Crescent where Tubby Clayton lived) he had motivated the formation of Seamark through some sort of charitable status.

‘I have never seen proof that this was true, but whatever the case, Tubby Clayton took a personal interest in Seamark and the fellows who were in residence. From time to time he would drop in and chat with whoever was around. Occasionally he would invite a small number to his home for dinner.

‘On two occasions I was fortunate enough to be on the invitation list – early in 1959 and again in 1962. Dinner proved a pretty spartan sort of meal – I recall one sausage, a small spoonful of mashed potato and a few peas on my first visit. The bonus came in the form of good conversation with Tubby and the two or three acolytes that he usually had with him and the so-called ‘table games’ that followed the meal. One such game was called “Up Jackson”. Never before or since have I come across the game and unfortunately the details now escape me. 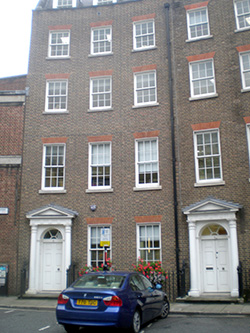 ‘Across the road from numbers 7 and 8 The Crescent was a large rectangular bomb site that stretched from The Crescent right through to Minories. Tubby tried to turn this into a Memorial Garden, and occasionally we saw him pottering there as we returned from college. The garden was based upon debris from the blitz. It appeared to have very limited topsoil but Tubby persisted and four or five spindly trees survived and a small number of flowering shrubs all surrounded by a low wall made from salvaged bricks. Tubby was always happy to interrupt his pottering to have a chat.

‘Today the whole of that memorial garden has vanished under a large redbrick office building and what used to be Seamark is now turned into what looks like a posh solicitors or accountants office.’

Times change, but Tubby Clayton’s memory lives on. Today a blue plaque adorns the old vicarage, and an effigy in the style of a medieval tomb marks his grave in the church of All Hallows by the Tower. Tubby Clayton died in 1972, just days after his 87th birthday.