Publicity – like luck – is unpredictable. My first novel, LOUISA ELLIOTT, had been out for about six months when my husband began his new job as Whitby’s Harbourmaster. A reporter from the Northern Echo came to interview him. Having answered all the questions, Peter thought he would mention me and my book. With its sequel, LIAM’S STORY, this historical novel set in 1890s York had been snapped up by a US publisher for just short of a million dollars.

I was at home in York at the time, so when Peter called me that evening to say they wanted to interview me direct, I blew him a kiss down the phone. I didn’t expect anything to come of it, because as far as I could see, the story had already been told. I was wrong. This was the point where everything went crazy.

Early next morning someone phoned about a photographer, who would contact me direct to make an appointment. I said yes, fine, and prepared to go out for my walk with the family dog. We were having a new kitchen fitted so I warned the workmen there may be call from the Northern Echo. Would one of them take it for me? I’d be back in half an hour.

Fido and I took our usual walk over the fields, me keeping an eye on him while thinking about the next chapter of my new book. Only as I got back to the house did I remember the photographer. Hanging up Fido’s lead, I asked if there had been any calls.

The cheeky one of the trio said there had been three, the last from The Sun. I chuckled – well, he was the joker, after all – and headed out of the kitchen.

He called me back. ‘Honestly, Mrs Roberts, it was a reporter from the Sun… And the Daily Mail,’ he said in awed tones, ‘they called too.’

Expecting a local paper, I found it hard to grasp that national dailies were interested. The Mail was astonishing, but why would the Sun – famous for lurid headlines, Page Three beauties, and sport – want to interview me?

A few minutes later the phone rang and yes – it was indeed a reporter from The Sun. The questions were very much along the lines of ‘How much money have they paid you, and how has it changed your life?’

Cringing, I almost kowtowed to the telephone in my attempts to placate the persistent voice on the other end of the line. It wasn’t the money which had changed my life, I said repeatedly, but recent changes in my husband’s career. From being apart for six months at a time while he was at sea, now he was in Whitby, we were able to see each other every week. And of course I was still working as a writer, and would continue to do so.

I dreaded what the piece would say, although perhaps the questions were not too badly fielded, since it was kind enough when it appeared. The cheeky bit was its position. The headline, MUM MAKES A MILLION, was wrapped around the boobs on Page Three. Nice boobs – but definitely not mine. 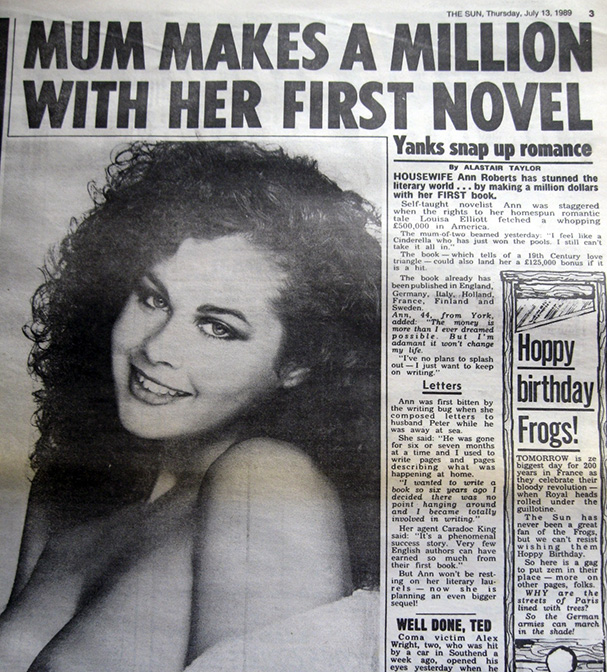 Well, it raised guffaws of laughter amongst family and friends – not to mention the kitchen-fitters – and in fact went rather well with one of the other events of that extraordinary week. But before I had chance to see it – or the Daily Mail piece that really set the ball rolling – the telephone started ringing. On the other end, I heard my husband’s voice saying urgently, ‘Put Radio 2 on now – Derek Jameson is reading the papers and talking about you…’

Derek Jameson? His gravelly voice was the voice of BBC’s Radio 2. He was so famous he was almost a legend. A former journalist, he had a regular spot quoting from the day’s papers, and this good news item had caught his attention. It was an incredible bit of free advertising for the book.

As a consequence, there were more calls, notably from my publishers. ‘Can you be in London on Wednesday evening? You’ve been asked to appear on Derek Jameson’s chat show on Sky TV.

Sky TV? That threw me into a spin. Beset by nerves, I needed an escort for the trip. Peter was occupied in Whitby, so I asked my friend Lena. She met me on the station at York, and we arrived at King’s Cross two hours later. Hailing a taxi, we gave the driver the address.

‘Archer Street?’ he said dubiously, looking us up and down, two respectable women with handbags and sensible shoes. ‘Don’t know any television studios down there.’

‘It’s just off Shaftesbury Avenue,’ I said helpfully, showing him the letterhead.

‘Oh, I know where Archer Street is,’ he said dryly. With that he told us to hop in, we’d go there and see what turned up. 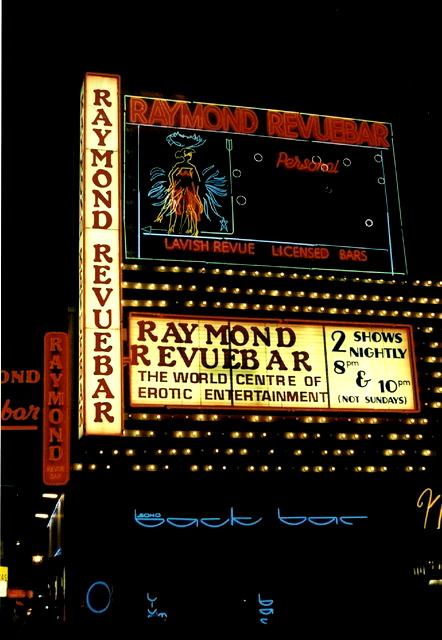 The building stood on the corner of Windmill Street. One of the most famous spots in Soho. In London. In the world, really. It was the old Windmill Theatre, famous for naked tableaux, whose boast in the dark days of the London Blitz was that they never closed. Not that we realised it in that first shocked moment. The huge sign above the entrance said it was Raymond’s Revue Bar, with cabaret, table dancing and striptease every night.

Yes, it was the right place – the theatre doubled as a TV studio during the day. The taxi driver checked before he let us out of his cab.

One of them jerked his head. ‘Up the stairs.’

We took deep breaths, tried to appear nonchalant, and entered the jet-black interior. But as we climbed, we glanced at each other and started to giggle.

‘Just tell me something, Ann,’ Lena asked, ‘what are two nice girls like us doing in a place like this?’

I never did find out exactly how or why it happened. Maybe it was a slow week on the political front, or soaring temperatures brought out a holiday mood. But the events of that afternoon kept us laughing for weeks: Derek Jameson bumming my cigarettes behind the scenes; Lena watching the show while drinking gin and tonic amongst Soho’s dinner-jacketed bouncers in the balcony bar. And me? I was on the stage of the old Windmill theatre, trying not to think of all those strippers while repeating my story for the umpteenth time.

There had been some strange moments while doing the research, but who could have predicted that writing a romantic novel about York in the 19th century would have given rise to bare boobs and a Soho strip club?

LOUISA ELLIOTT and the sequel LIAM’S STORY are both available as ebooks. They will shortly appear in print.   https://annvictoriaroberts.co.uk