Skip to content
Guy Fawkes, where are you now that your country really needs you? 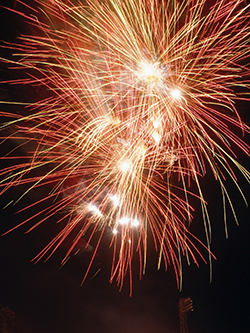 That piece of graffiti, seen after a walk across Ilkley Moor in Yorkshire, prompted hearty laughter a few years ago. If we’d had a spray can we might have added, ‘Alive & well, & living at Farnley Hall, just across the valley…’

The name lives on – quite innocently in the Fawkes family – while the life and death of the original anarchist has passed into legend. We still celebrate Guy Fawkes Night in England, and November 5th was a jolly feature of my childhood, with garden bonfires, potatoes roasting in the ashes, Yorkshire parkin handed round, and fireworks exploding with crackles and bangs and great shooting stars.

‘Remember, remember/ the fifth of November/ gunpowder, treason and plot…’ Kids would chant it while scouring the neighbourhood in search of stuff to burn – making the biggest bonfire was a competitive sport. You’d see others trundling an old pram with a stuffed figure sprawled across it, begging ‘A penny for the Guy!’ to buy fireworks for the night.

We never burned a guy – it always seemed rather macabre. But the story of Catholic plotters seeking to blow up Protestant King James as he opened Parliament in 1605 was trotted out most years at school. You might say it was the first terrorist bomb plot of the modern age – discovered by the secret intelligence network of spymaster Robert Cecil. (An early MI5? Nothing much changes.)

We all knew about Guy Fawkes – but what I didn’t know for many years was that following the plot’s discovery and execution of the 13 conspirators, it was ordained by King James I that the country should give thanks each year for his survival. And celebrate the defeat of Catholicism in the United Kingdom.

That ‘joyful day of deliverance’ remained in force until 1859. After 250 years of being ordered to remember, no wonder we in the UK are still lighting bonfires and enjoying the fireworks.

But what about that man Fawkes? Who was he? During my first term at grammar school in Otley, West Yorkshire, I learned that he was related to the Fawkes family of Farnley, the big estate just up the road. Major Horton-Fawkes – a charming man – was chairman of our school governors.

Some thirty years later, when my son started at Farnley village school, I learned that Farnley bucked tradition in that it did NOT have a bonfire on Guy Fawkes Night. ‘We don’t like to dishonour members of the family,’ the Major’s son explained with a smile.

A few years later we moved back to York – my birthplace, and Guy Fawkes’s too. The year my son became a pupil at St Peter’s School, he said, ‘No, Mum, we don’t celebrate here, either. Guy Fawkes was a pupil, you see – so it would be like burning one of our old boys.’

Must say I rather admired the sentiments.

Fawkes’s father was an ecclesiastic lawyer attached to York Minster; his maternal grandfather was a Lord Mayor of York. So he was raised a Protestant – nominally, at least. He was eight years old when his father died, and was probably converted to Catholicism later, by his stepfather’s family, the Bainbridges of Scotton, near Harrogate.

Those who know me will be exclaiming at the coincidence. My daughter is married to a Bainbridge… fictional Bainbridges also appear in LOUISA ELLIOTT… and I was taught about the history of Farnley by Mr Charles Bainbridge at Prince Henry’s Grammar School Otley. 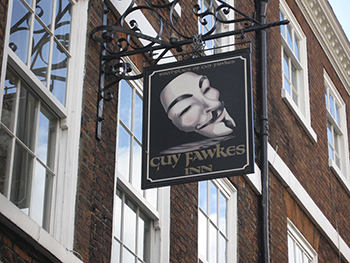 So Guy Fawkes and his connections have been an odd feature of my life. Do I admire him? In a way, yes – I admire his devotion to his beliefs, while not agreeing with his actions. It pleases me to know that he stood out against torture, did not betray his fellow-conspirators, and when it came to that most barbaric of traitor’s deaths, he leapt from the scaffold and broke his own neck before his body could be quartered while he was still alive.

An honourable man? I think so.

To repeat the old toast: ‘Guy Fawkes, the last man to enter Parliament with honest intentions…’