A nostalgic yearning for the past struck me today. It was prompted by news that there is to be a new exhibition space at York’s Castle Museum. A cause for celebration in one sense – the Museum was one of my favourite places as a child, and later featured strongly in my research for LOUISA ELLIOTT. So yes, I am both pleased and proud to think that the Heritage Lottery Fund is helping to finance it.

But I’m both proud and sorrowful that the first exhibition – opening in summer 2014 – will be to mark the centenary of WW1. Like almost every village, town and city in the western world, York lost many sons – and daughters – to the war of 1914-18. 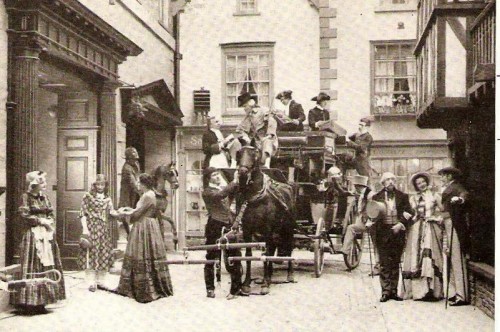 At the age of 20, my York grandmother gave up packing chocolates at Rowntrees in favour of packing shells. In December 1916 she miraculously survived an explosion at the Barnbow munitions factory just outside Leeds. It occurred in the hut where she was fitting fuses and screwing on caps. 35 women were killed outright, dozens more severely injured.

As a child, when I remarked on the white streak in her hair, Grandma quietly described the horror of seeing bits of bodies, arms and legs, just flying through the air. She suffered ‘just a graze’ as she put it, but to be grazed by a shell-splinter was no mean injury. It sliced past her forehead, opening a gash by the hairline – hence the white streak. Her badge of honour, I’d say, proving she’d done her bit for her country as well as the men at the front. So I hope the new exhibition will pay homage to the women too.

Years later, I was given a diary, written by a York relative who served with the Australian forces in Egypt and France. That 1916 diary was to be the inspiration behind two novels, LOUISA ELLIOTT and LIAM’S STORY.

While researching York’s military connections, I met Dr Peter Newman, who was then the Keeper of Military History at the Castle Museum. Through him I was privileged to see ‘behind the scenes at the museum’ – the store rooms full of uniforms, the gun room with its collection of ancient weaponry. And through him introduced to people whose knowledge became woven into a novel.

My picture of life in York in the 1890s would have been nothing without my visits to the Castle Museum. Even as a child, I found Dr Kirk’s collection of ‘bygones’ a place of magic, where the imagination could run riot. The rooms with their furnishings in context, looking down on ‘Kirkgate,’ the famous museum street with its shops and Hansom cab.

At the age of 12, I remember rushing back from there one day, full of excitement.  ‘Grandma, guess what? I’ve just seen your old kitchen range in the museum!’

But it had to come – on a recent visit I saw my own past preserved there: a street-scene from the mid-1960s, featuring a motor-scooter and Twiggy!