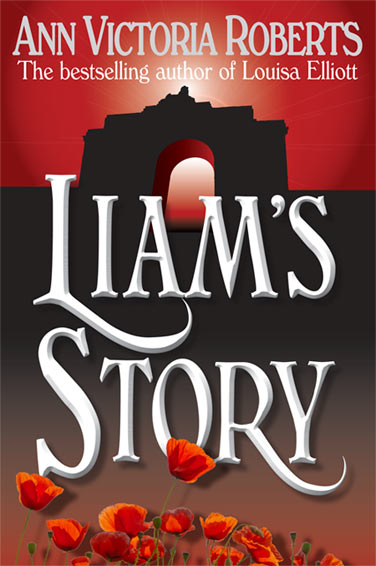 After twenty-four days’ subjection to constant shelling and machine-gun fire, it was good to be behind the lines again. Liam and his team went straight to the baths at Sailly, and then on to the battalion post office. Apart from one letter from Australia, for some reason there had been no mail since coming into action; he was overjoyed to see a pile of letters and two parcels of newspapers awaiting him.

It was a pleasant afternoon and the six men ambled down the road, reading their mail as they went. Liam flicked through the collection of envelopes, mentally identifying each writer. Three from York, one from his cousin in Leeds, two from Robin, and one with a blurred postmark and writing he could not believe he recognized. He stopped in the middle of the road, staring at that distinctive hand.

Although he had deliberately not thought of her for a long time, her face, smooth, fair, serene, appeared before his mind’s eye as clearly as though she smiled for him.

For a minute or two his feelings were so jumbled he could not have said whether he was delighted or dismayed. He was certainly shocked. Why had she written? After all this time, why now? Was something wrong, had somebody died?

But no – he had letters from all who were important to him, it could not be that. Her father, perhaps? His father? He stared at the envelope as though it might tell him itself. Perhaps it was something else – perhaps she was getting married.

His jaw clenched on that thought. Liam slipped the envelope into his breast pocket. Whatever it said, he could not bear to read it now.

The others were already some distance down the road, seated outside a little estaminet, beers on the table in front of them. He lit a cigarette before joining them.

‘All right, Corp?’ one of them asked, glancing up with concern in his eyes. ‘Not bad news, is it?’

Liam shook his head. ‘No. Just something from somebody I never expected to hear from.’ He laughed, a little shakily.

Another one grinned. ‘She’s heard you’re a hero, Corp – wants to know you now.’

‘Rubbish,’ he muttered, and stuck his head into one of the York newspapers. The letters – all of them – would have to wait until he was alone.

The others read their mail and ordered more beers. Liam’s newspapers were passed around. Lighting a fresh cigarette, he read the war news in the most recent paper and then immersed himself in the more local tit-bits. Although he was barely concentrating, the graphic description of a tragic drowning at Bishopthorpe caught his attention. Whether it was solely that or the effects of the letter in his pocket, he could not have said; but he was suddenly reliving the agonizing emotions of his last day at home. Robert Duncannon’s voice, which he thought he had forgotten, surfaced unbidden, banishing the flicker of hope that letter inspired.

A sudden exclamation from one of the others disturbed his anguish.

‘Well, of all the dirty, low-down tricks! Have you seen this? I never heard about this, did you? Where the bloody hell have we been for the last month?’

‘In the trenches, mate – have you forgotten?’

They all wanted to see, but the newspaper was passed to Liam. Reluctantly he took it, scanning the headlines several times before the meaning sunk in.

In Dublin just over a month ago, there had been armed rebellion on the streets. On Easter Monday a republic had been declared, and for several days the General Post Office on Sackville Street was occupied by forces opposed to the Crown. After five days of fighting the rebellion was crushed, but British field guns had destroyed much of the centre of the city.

It seemed incredible. A stab in the back. Like the others he was disgusted, on reading further, by the apparent connection with Germany. An ex-British consul, Sir Roger Casement, had tried to enlist enemy aid, but had been arrested after landing from a German submarine. He was to be tried for High Treason. The Irish rebels had been shot.

He stopped reading, handed the paper to someone else and took a deep breath. Without that letter in his pocket, he knew he would have been frantic by now, wondering whether Georgina might have taken an Easter holiday to be with her aunt in Dublin, wondering whether she was still alive…

But where had that letter come from? And when? Oblivious to his companions, he whipped the envelope from his pocket and tore it open. The letter, dated 30th April and sent from a hospital in London, was almost a month old. ‘Dear Liam…’

Dear God, he thought, closing his eyes, seeing her face, hearing her voice; how long since he had heard her speak his name!

‘… Just a few lines to let you know that we all are well. With the dreadful news from Dublin this week, I fear you may be wondering about us, and although I know your mother writes regularly, I wanted to be sure you were not anxious.

‘Father has been in Dublin since Monday. His letter today says the fighting is over, although he is deeply grieved by the destruction to the city. Not his responsibility, thank God, but he is bitterly angry with those who ordered it, and now fears for the safety of all those involved. It will not stop here, he says.

‘The strange thing is that I applied for leave to go home for Easter, it being so long since I saw Aunt Letty. Father was against it, but in the end Matron could not spare me, so it was just as well. Apparently Aunt Letty refused to stay at home, and came close to being arrested for trying to help the wounded. All this in spite of her arthritis! What a family we are!

‘I hope you are well, dear, and that things are not too terrible for you in France. Your mother writes often and keeps us up to date with your news, but it would be nice to hear from you personally, if you have time to write. If not, then I understand.

‘Oh, you beautiful girl,’ Liam whispered, crushing the page in his hand.