Imagine, there you are, just coming to terms with the fact that your first published novel has been received with joy, it’s already earned what feels like Monopoly money and is on its way to becoming a bestseller… 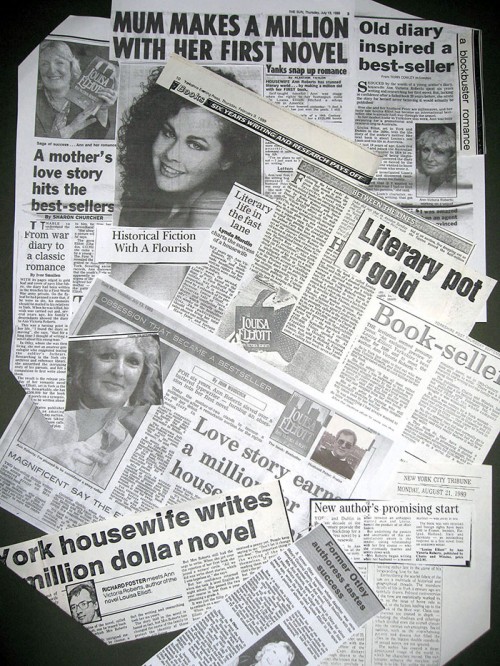 You’re delighted but disbelieving – shocked, even. Before you can gather your wits, the local paper gets hold of the story and runs the headline: YORK HOUSEWIFE WRITES MILLION DOLLAR NOVEL, with an article that goes on to attract the attention of the national dailies. The Sun’s piece – very cheekily – runs MUM MAKES A MILLION and wraps it around the bare boobs on Page Three. Then the first invitation to a TV chat show arrives…

You long to tell the story, but the hot topic is that million-dollar advance and how it’s going to change your life. How do you deal with that?

In the video clip shown here – from the BBC’s afternoon show, The Garden Party, broadcast from Glasgow in 1989 – I’ve almost got the hang of it. I’ve conquered the panic and learned how to smile – but this was the third time of asking…

To be honest, when it happened to me, the idea of the money scared me almost as much as the sudden media attention. I had to keep reminding myself – and others – that I wasn’t a Lottery winner, that these huge figures were advances for two books, LOUISA ELLIOTT and LIAM’S STORY, to be paid over a period of years. It wasn’t coming across the Atlantic like Mafia money in a suitcase, and if I didn’t complete the second novel, it would remain a fantasy.

And what about that ‘housewife’ tag? As a woman of the feminist era, it seemed somehow demeaning. On the other hand, it was an attention-grabbing angle, and anyway, how else could they describe me? I wasn’t a university graduate, I had no connections to the literary world, and I’d spent most of my adult life as a wife and mother, keeping the home fires burning while my husband was away at sea.

The fact that he had recently come ashore to work was far more life-changing for me than any amount of money. But without delivering a speech it was hard to get that across.

But all publicity is good publicity, as any media man will tell you. And this was, after all, a feel-good story – a great antidote to the usual misery on the national news.

I had been blessed by an extraordinary series of coincidences to do with LOUISA ELLIOTT and LIAM’S STORY. From the first days of research right through to publication, it made the truth behind the novels almost a fairy tale. I longed to tell it, but even I found it hard to believe.

And to cap it all, life had suddenly become a roller-coaster, inviting me aboard. A split-second’s hesitation. Terror battling with excitement. What to do?

No question, really – just prepare for thrills and spills and enjoy the ride!

It didn’t last long but it was worth the risk – a dazzling fifteen minutes of fame that left me breathless, laughing, and wondering how celebrities dealt with this kind of thing on a daily basis.

Writers are more used to the peace of working alone, so it was a relief for me to get back to the typewriter and a different kind of excitement. After years of waiting, LIAM’S STORY was tapping me on the shoulder and demanding to be told!

(For more about the story behind the story, watch out for A WRITER’S TALE, to be published later in the year.)