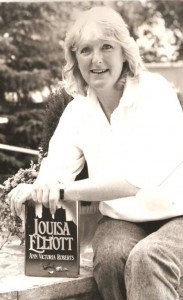 Well, it’s been emotional, as they say. In every sense of the word.

Re-editing a novel 23 years old, written when I was in my 30s, has been a challenge. I’ve been through excitement when the digital file arrived, anticipation waiting for the right day to begin, dismay when I started reading, and…

Dismay? Oh yes. The incredibly long sentences – and all those semi-colons. When someone back in 1989 said the novel was reminiscent of Hardy, I thought it was a compliment – but it may well have been despair at the endless sentences, the dwelling on emotion, the feeling that one simply wanted to get hold of these characters and give them a good shaking!

The last three weeks has been like living in a time-warp. Editing a 700-page novel, working late, not sleeping, going to bed after midnight, getting up again at 4 or 5 am because my characters were ‘bothering’ me – I’ve been doing all that, just like the old days. And what’s more, I’ve been alone for the past three weeks, too – my husband Peter has been away at sea, just as he was then.

The most extraordinary part, though, has been getting to know my characters again. They were part of my life – through two big novels – for almost ten years, so they have remained in my memory like old friends. Ones who shared some tumultuous events, but have since dropped into the background. But meeting them again – oh, my goodness, that’s been very strange!

Imagine – you go to a reunion after 20 years, only to find that you’ve grown older, but your friends have stayed the same. Not just in looks, but in dress, habits, enthusiasms and – yes, most shocking of all – they’re still fighting the same battles, still beating their breasts over that unwise affair, still bewailing the consequences…

There was a point, halfway through the book, when I called my oldest friend and half-sobbed, half-laughed in utter frustration. ‘Ye gods!’ I exclaimed, ‘Edward’s driving me mad! All that harking back to childhood – all that middle of the night stuff – why doesn’t he just rip off his hair-shirt and pull himself together!’

‘As for Louisa,’ I declared, ‘I want to give her a slap. All those hissy-fits over the slightest thing… And Robert!’ I exclaimed. ‘Well, he’s just a selfish, chauvinistic b****** with one thing on his mind!’

She laughed, reminded me that I was indeed in my 30s then, and maybe it was a reflection of how I was feeling at the time. (A little worrying, in retrospect…!)

But it wasn’t just the characters. There were technical faults that as a first-time novelist, I hadn’t been aware of. One mistake that I wouldn’t make now, involves ‘point of view’ – in any given scene, whose point of view are you taking? One chapter struck me as being so mixed up, I had to re-write it. But guess what? It lost all its tension. So it was back to the original, with just a few adjustments. And the lesson that maybe technical expertise isn’t all that’s required!

To retain the emotion, retain the passion, I just had to go along with it. I had to remember that this novel was a bestseller in its day – and as I know from readers who have come to it recently, it remains an intensely powerful story. Set in late Victorian England, to be sure, but with themes as modern as today.

So I settled for restructuring a lot of sentences (you can’t just remove semi-colons!) and toning down a few heated exchanges. (Not many.) I tightened up some descriptive passages, and got rid of some of the back-story which appeared in the first two pages.

But after three weeks of living alone with these characters through 12 and 14 hour days, it’s been like revisiting the past. My past – their past – the characters themselves. I found myself so totally absorbed by their quandaries, their decisions, and the effects of those decisions, that I was, once more, living in their world. A 19th century world of grandeur and poverty, with many shades of grey (oh, yes!) in between. And I’ve been thinking, all the way through, that fans of Julian Fellowes’ DOWNTON ABBEY will certainly enjoy LOUISA ELLIOTT. It has all those elements and more.

Through 700 pages, the experience for me has been rather like bringing up my children. Getting them through the troublesome teenage years, to a point of maturity where they’re ready to leave home.

By the time I reached that point, a couple of days ago, I knew that they’d acted for the best in difficult circumstances. But I also knew that those decisions would continue to haunt them for the rest of their lives…

I console myself with the thought that it won’t be for very long. Once LOUISA ELLIOTT is launched as an ebook, I’ll be preparing for another lengthy visit. (Or do I mean girding myself for more trouble?) Louisa, Edward and Robert will be bringing their children home to stay for another three weeks, so we’ll just have to see what happens then!

LIAM’S STORY is the next project.