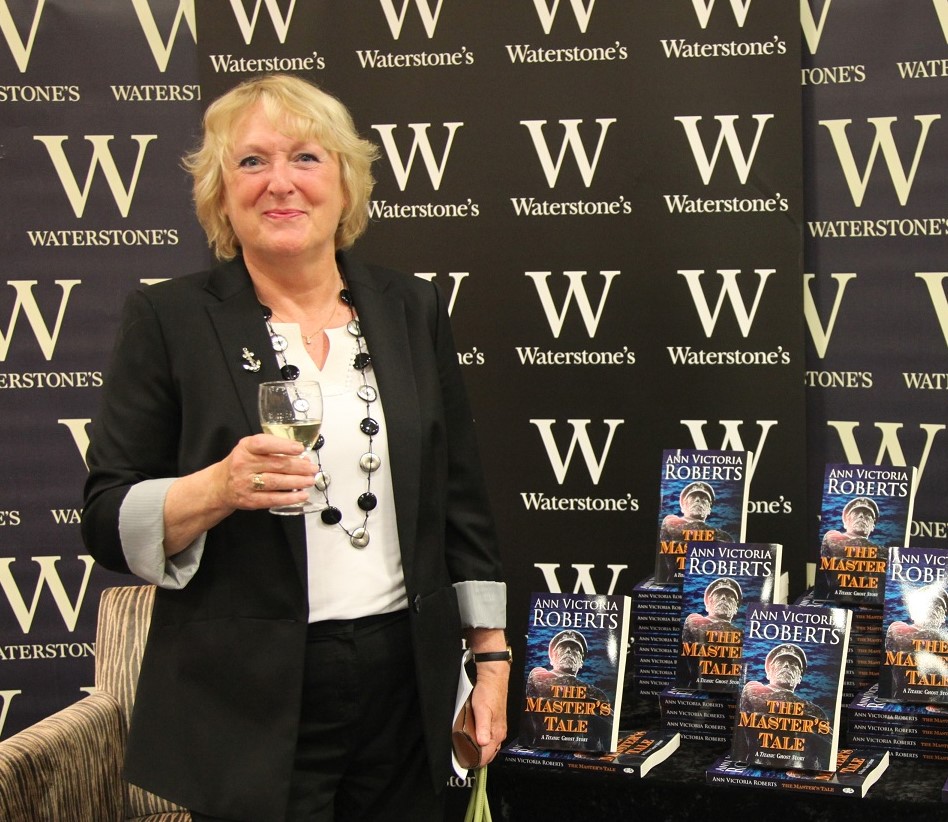 The launch of THE MASTER’S TALE on Tuesday evening at Waterstone’s in Southampton was a great success! Lots of local friends turned up in support, and the staff serving drinks were really friendly and enthusiastic. Plus a lovely display of books in the entrance – what more could an author ask?

Just Captain Smith to speak his own words – and we got him, in the person of actor Patric Howe. As he told the story of what happened on 20th Sept 1911, when RMS OLYMPIC was in collision with HMS HAWKE, he was Captain Smith, and we were there with him on the bridge, looking on in horror as the unthinkable happened. The audience were mesmerised as he surveyed the damage to his ship, realising – with him – just how far-reaching the consequences were likely to be.

Wonderful to hear my words brought to life – and the applause as he finished was so enthusiastic! I was so thrilled – it really made the evening.

But having said that, without Tessa, my publisher, it would never have happened. Can’t thank her enough for all her support and hard work in bringing the book to fruition, and organising such a successful launch with Waterstone’s.

It was held at the Above Bar shop, but handled by manager Carl from the West Quay branch. He was pleased that lots of books were sold – and I was delighted by his enthusiasm.

It would have been nothing though, without the warmth and encouragement of all our lovely friends – Tessa’s, as well as Peter’s from the Shieldhall, from Whittaker’s Tankers, from the Blue Room Writers’ Group, and friends and family from Worthing, Southampton, Hamble, Dibden Purlieu and Alverstoke.

Thanks to you all for making such a wonderful evening – I was still orbiting for 2 days afterwards!