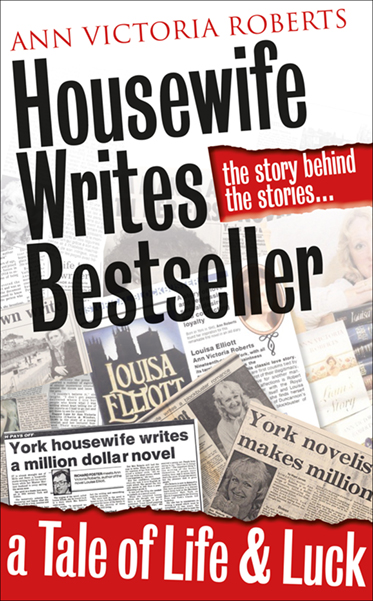 With thousands of new releases every year, each special in its own way, how did a first novel by an unknown author get noticed? Everything was against it: Louisa Elliott was not about sex, crime, money or politics. It was not even a typical romance. The characters were mostly ordinary people dealing with extraordinary circumstances in late 19th century York. The chances of this book becoming a best-seller were so remote, the odds against it were millions to one. And yet Louisa Elliott was translated into several languages and became a best-seller around the world.

As for me, the author, I didn’t go to university and had no connections to the literary world. As a sea-captain’s wife, I was coping as a single mother while he was away at sea – for up to six months at a time. Occasionally, the children and I had the thrill of joining him aboard, often at very short notice. Otherwise, in the days before satellite communication, virtually our only contact was by letter – and mine could take weeks to arrive. I like to think that those regular letters – plus being an avid reader from childhood – was how I served my apprenticeship as a writer.

Even so, I still wonder what it was that lifted Louisa Elliott out of the crowd, and which particular angel bestowed its wings? I’d had a specific story in mind, but even as I began, the original idea was overtaken by another. At once, it was as though I’d opened a door to a different world, one in which coincidence became normal, while chance stepped back with a smile. In the end, that single idea became two separate novels, Louisa Elliott and Liam’s Story – but in some organic way, each was born out of the other.

These events occurred in the 1980s, but the story itself is timeless, a kind of rags-to-riches fairy-tale that began and ended with wayside poppies, encompassed a family diary written a century ago, and recently returned to its beginning.

As readers, we browse in bookshops, spot a favourite author or intriguing title, and take it home. Rarely do we consider the path that book must have taken from the author’s pen to a bookshop shelf. And yet the story behind it is often stranger than the fiction it contains…

Housewife Writes Bestseller, is due to be published in October – so if you fancy a roller-coaster ride of life, love, luck and coincidence, you can let me know via the Contact Me button on my website Home Page. I’ll email you with the date and details.