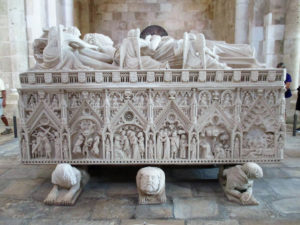 Nazaré, south of Porto, suffers – like Vila Cha further north – from sea-frets from the Atlantic. But as we were a little way inland at Camping Vale Paraiso, and high on a hill, we were able to bask in the sun and view the bank of sea-mist from afar. Through the pines each evening came a spectacular sunset effect. The view of black silhouettes against a deep orange glow was just like a picture on a Japanese lacquer box – perfect!

The little town’s sea-front with broad sands, restaurants and gift shops did not exist before the 18thC. Originally it was an ancient settlement on the cliff-top, said to be named for a statue of St Mary of Nazareth brought to Portugal in the 4thC. We may have seen it in the local church, although it was hard to make out. A tiny black statue in a glass case, high on the altar, and protected by the chancel rails. 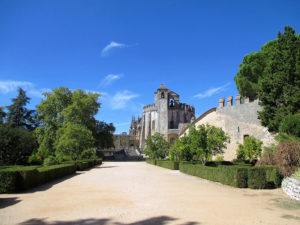 Of course, Portugal is a Catholic country with many splendid churches. We’ve wandered in, gazing in awe at Baroque decoration, painted ceilings, tiled walls, gilded columns and statues of the saints. All that decoration can be distracting to English eyes – the only answer is to sit quietly for a few minutes while focusing on the reason for the church being here. And then peace takes over and a few moments of prayer are possible.

Further inland, the monastery at Alcobaça astonished us when we first saw it a few years ago. A Portuguese Baroque façade gave no clue to its interior. We climbed the steps, approached the great oak door, entered – and gasped. A perfect Cistercian church, dating from 1153, with vast limestone pillars soaring heavenwards, narrow lancet windows, and a curved apse behind the altar – breathtaking in its simplicity.

I think we were both choked by emotion that first time, recognising at once that this was how the great Cistercian abbeys of Yorkshire – Fountains, Kirkstall, Rievaulx and Jervaulx – must have looked before Henry VIII got his hands on them in 1539. 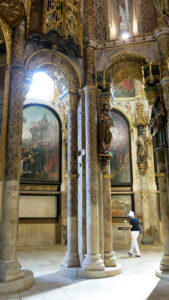 4 Inside the Templar Church

Visiting the church again, we noticed different things, including a pair of beautifully carved Royal tombs from the mid-14thC, facing each other from the transepts – with a grim tale attached. The Portuguese King Alfonso forbade his son, Pedro, to marry a Spanish noblewoman, Dona Ines. When his son defied him, King Alfonso had her assassinated – not realising that the couple had been secretly married just days before. When his father died, it’s said that the new King Pedro had his dead wife disinterred and crowned Queen of Portugal, before assassinating all those of his father’s court who had opposed the match. And then he had two tombs created, facing each other, so that at the Last Judgement, when the dead shall rise, King Pedro and Dona Ines will see each other once more and be reunited.

Phew, such passion and tragedy – I wonder if Mr Shakespeare ever heard of it?

Even more intriguing, a couple of days later we drove about an hour further west, to Tomar, a World Heritage Site on a winding river, dominated by the Convento do Cristo – a fortified monastery on the rocky heights above. 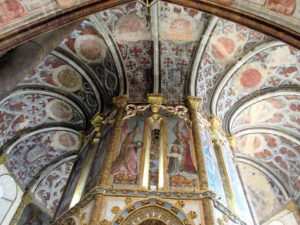 5 Ceiling detail of round church

Seat of the Knights Templar, it was erected in the 12thC – and contrary to what the history books say, in Tomar the Knights survived their suppression two centuries later by being renamed the Order of Christ. In that capacity, they continued to act as soldiers, monks and bankers – amassing great wealth along the way – and funding the explorations which opened up the New World…
The monastery, which, like their wealth, continued to expand until the early 1800s, is HUGE. The dormitories alone housed over 200 monks, with tiled walls, a central heating system, window seats overlooking the cloisters, and vast kitchens below.

But the pièce de resistance of this amazing castle is its circular church, dating from the 12thC. The 16-sided Templar design is thought to be in imitation of the Church of the Holy Sepulchre in Jerusalem. To quote the guide, ‘The interior is otherworldly in its vast heights – an awesome combination of simple forms and rich embellishment…’

Otherworldly is a good description. Everything seems to be suspended, with no connection to the ground – photographs just don’t do it justice. 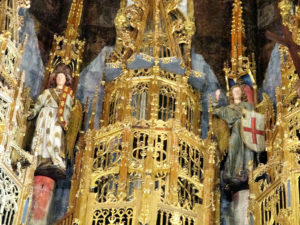 Two more unusual features were the huge oak doors at the entrance and a strangely high chancel rail – to allow the Knights to enter on horseback and attend the Mass without having to dismount!
While the Convento do Cristo is evocative of a distant and mysterious past, the old town of Tomar nestles at its foot, with a statue of the armour-clad founder in the main square. Bizarrely, the Saturday we visited, a brass band competition was going on there as we were having lunch. So odd, we half expected to see the Black Dyke Mills Band marching past…

That evening, returning to our campsite at Nazaré, we found our new neighbours were not only Yorkshire folk, they’d lived in the market town of Otley for 30 years. It’s where Peter and I lived for 15 years, where our children were born, and where we first met our travelling friends, Anne & Fred.

So we spent a couple of jolly evenings, reminiscing with our new friends, John & Kath – who even bought a copy of my newly published paperback, ‘The Master’s Tale’.

Cue for a celebration with a bottle or two of the excellent local wine – before we too moved on, further west into central Portugal. At the moment we’re not far from the Spanish border, in high country surrounded by vineyards, olive groves and plantations of cork oaks. Have you ever wondered about that little cork in the bottle of wine? You’ll be surprised to discover how it gets there…