Skip to content
The Red Cross: One Man’s Death 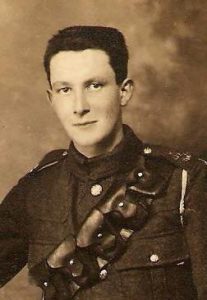 Two brothers, Bob, my grandfather, and Will, his elder brother, served during WW1 from the outbreak of war in 1914 until the autumn of 1917. Bob was with the Royal Field Artillery, and invalided out with rheumatic fever; Will, a machine gunner with the Australian 1st Division, was killed at Ypres, during the Battle of the Menin Road, on 20th Sept 1917.

After being given Will’s 1916 diary, and deciding to write his story, I’d been ‘distracted’ by his unconventional family history. I’d written a fictional account of his parents’ generation in Louisa Elliott, but now it was his turn to be the focus in Liam’s Story.

‘Caught in the bombardment: nothing left to bury.’ My mother’s succinct statement regarding Will’s death had been accepted without question for years. But how did she know? When I asked, she said she’d been told by her father, Bob. I imagined he’d had the information from some official source – but as I was about to discover, that was not the case.

A friend had become conversant with military records while investigating his uncle’s movements in WW1, and he volunteered to handle correspondence to do with Will’s death. But when the first information arrived, it told us little. Nor did the diary. After describing his stay in hospital from mid-September 1916, Will’s entries ended just before Christmas. If there was another diary, it did not survive.

So I had a blank until Ypres in September 1917.  Enquiries took time, but after months of waiting – and some welcome assistance from Peter Charlton, the Australian author and journalist – the next batch of information from Australia was more revealing. Records showed that after leaving hospital in London in December 1916, Will was convalescent near Bournemouth. Curiously, the young man who’d described himself as ‘a farmer’ when he joined up in Australia, was sent in the spring for retraining to the estate of Belton House in Lincolnshire, only twenty miles from where his forebears had farmed for generations.

There was more. To our amazement, the Red Cross in Australia had conducted an investigation into his death, set in motion in the 1920s by Will’s father in York. Initially, Will had been posted as missing in action, which could have meant a number of things: death or injury on the battlefield; desertion, or even that he’d been taken prisoner. Knowing nothing, his family in York must have been sick with dread. In the midst of a bloody battle that went on throughout the wet autumn of 1917, anything could have happened. A little later that same year, Will’s brother Bob was repatriated, suffering from rheumatic fever.

The fact that Bob had served with the artillery from 1914, spoke volumes to our researcher friend, Tom. In the early days, while we were still under the impression that Will had been killed by a shell burst, Tom had voiced something that my mother and I had never considered: Will could have been killed by so-called ‘friendly fire.’

By 1917, the war lords in Whitehall had learned something from their mistakes on the Somme, and had devised a new tactic, the ‘creeping bombardment.’ The artillery would fire just beyond the advancing troops, in theory allowing them to hide behind the exploding shells and billowing smoke. It was put into effect at the Battle of the Menin Road.

The sad and terrible irony is that my grandfather Bob would have been aware that sometimes gunners got the range wrong; that sometimes advancing troops lost their way in the smoke, only to be caught in their own fire. Clearly, he believed his brother Will had died like that. Caught in the bombardment, my mother had said, quoting her father from all those years ago.

But according to the Red Cross, Will was killed by a sniper’s bullet – raised his head at a fateful moment, and was caught, cleanly, by a crack shot from the German lines. Too long away from the front, was Tom’s opinion; he’d lost the battle-hardened instinct that kept him alive through Gallipoli and the Somme.

If my grandfather Bob saw the results of that Red Cross investigation, why did he not believe it? Perhaps it seemed too much of a cliché to be true – just like the letters officers sent out to next of kin, glossing over the unpalatable fact of agonising death from injury on the field.

I can imagine him thinking that. But as Tom explained, machine-gunners were hated by the enemy. Machine-gun fire could wreak devastation and destroy an attack almost before it began – as happened on the first day of the Somme. With that lesson learned, snipers on both sides were detailed to pick off the machine-gunners first.

According to the Red Cross report, that seemed to be the case here. They traced four survivors of that action, men who had been close to Will that day, who had seen him die, and buried him on the battlefield.

The first and most extensive account was given by the sergeant in charge of his gun team:

‘On Sept 2oth 1917, he was in my gun team and we were advancing with the Inf. After going for some time we made a halt and took cover in shell holes waiting for the barrage to lift. A lot of German snipers were firing round about us and while [Will] had his head exposed over the top of the shell-hole a bullet struck him in the right side of the head, and went through his head to the left side. He died instantly… before he had time to realise the first shock he was dead. I was about 2 yards away from him at the time. Another of the gun team was next to me and the bullet which killed [Will] also wounded the other man in the hand. Our officer was near and I went and reported it to him, he came over and took what valuables were in the pockets and handed them to me. I gave them later to a friend of [Will’s] and he was to take them to his people while in England on leave. He was buried on the battlefield as it was so far forward and there was no means at the time to take him back to a military cemetery. The place would be marked by a cross but would be hard to locate. Personal appearance he was a tall, well-built chap, fair, about 20, was an Englishman by birth, his parents live in Yorkshire. He was in Australia at the outbreak of war and joined the Expeditionary Force. He was with the 8th Battn. 2nd Inf.Bde. during the time they were on the Peninsular [Gallipoli]. Was transferred from 8th Battn. To 2nd M.G.Coy early in 1916 and came to France 31-5-16. He was sick and sent to England Oct. 1916 and returned to his unit in France in the middle of 1917. The 20th Sept was his first engagement since returning to France.’

The letter, from Grantham, Lincs, dated 28.3.18, was forwarded from London 5.4.18, presumably to Australia. The other three statements, obtained later, are less comprehensive but describe the same event: ‘He was in the front line trench at Polygon Wood. He was sniped by a rifle bullet… he fell and I saw his body 5 mins later…’  Another wrote: ‘It happened to the left of Northampton Farm…we were getting into position when he was hit…’ The third witness said: ‘I saw him killed. He was hit in the head by a sniper…and buried on the spot in a shell-hole. I have already written to his people about it…’

For me, decades later, these witness reports tallied with accounts of the battle, in which the Australians advanced, then paused for 45 minutes to dig in, before advancing again on Polygon Wood…

But it would have taken months for such information to percolate through official channels and longer still for those witness statements to be collated. We tend to forget that this war, conducted on an unprecedented scale, was unlike anything ‘official channels’ had ever dealt with before.

It was CEW Bean, the chronicler of the Australians’ exploits during WW1, who saw the problem and pressed for the establishment of a war records department in Australia. It began work in 1917. Bearing in mind the size of the task, it’s hardly surprising that details were not sent to Will’s family until they enquired of the Red Cross in the mid-1920s.

Quite why the enquiry was initiated at that time, years after Will’s death, leads me down even darker roads. Was his mother, Louisa, still hoping her eldest son was alive – even while her younger son, the artilleryman, shook his head in despair?

Considering the facts, the disappearance of a shallow grave in a dip of land just a couple of miles outside Ypres is understandable. In torrential autumn rain, and with the ancient drainage system destroyed, the area between low-lying Ypres and the Passchendaele ridge seven miles distant became a morass of mud in which men, horses and field guns were swallowed whole. Tragically, the gains made by joint Australian and British forces were lost in the German spring offensive of 1918, not to be regained until just a few weeks before the Armistice.

The Red Cross investigation into Will’s death was just one that I know about. How many more such investigations were carried out? And not just on the Ypres Salient. I cannot believe that all the efforts made to trace witnesses resulted in make-believe statements, just so that Will’s family – and others like them – could feel better about his death. Surely, if he had been killed by a shell burst, the rest of his gun team could not have remained unscathed.

It saddens me to think that my poor grandfather believed otherwise.

Back in 1990 when I was first asking questions and researching the novel, I’d had no idea that Red Cross volunteers chased information to that extent; searching for the truth about individual soldiers, in order to settle the questions asked by so many bereaved families.

So hats off to the Red Cross – without their efforts, the questions may still be unanswered.