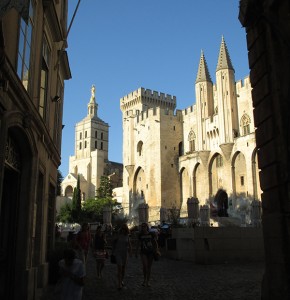 After crossing Provence, we arrived at Avignon, home of the medieval Popes. Great walls, the famous broken bridge of the song, and tied up on our side of the river was a converted Rhine barge, advertising a small circus. ‘The Piglet Circus’ to be precise. Curious, we stopped to watch the high-wire artistes rehearsing, while three dogs, a strutting cockerel and two small hens looked on from the deck. And then we heard a strange grunting noise from our side of the tow-path – an enormous black pig, complete with tusks, wallowing in the sandy soil!

Not a sight you see every day. But this great boar was tame and completely happy – as were his owners seated on a bench nearby. Laughing, we watched him for a while before crossing the bridge and walking into town for an evening drink and a bit of sightseeing.

It would have been good to spend a few days in beautiful Avignon, but although our 3 star campsite – Bagatelle – was well-shaded and handy for sightseeing, we had been there before. So it was just a one-night stop. This time we had places to go and old friends to visit. Our next destination was in the Languedoc, a 4 star campsite near Alès, on the slopes of the Cevennes.

La Croix Clementine has great facilities, an excellent bar and restaurant – great food – and also a big swimming pool. It’s a family owned site and beautifully kept – tubs of flowers here and there, all pitches shaded by tall acacia trees. We hadn’t been for about three years, but on arrival we were greeted like old friends, with a beer on the house. What more could you ask?

We discovered the site about twelve years ago when visiting our translator friend, Françoise. She and I met when she was commissioned to translate my novel, Moon Rising, and have been firm friends ever since.

Usually, we’ve visited her summer home in May, when the weather is cooler, going on walks and visiting remote communities where French Protestants hid during the wars of religion centuries ago. This year it was so hot, we did very little walking. Beneath the trees surrounding her house we chatted about books, films and family news, whilst enjoying some wonderful meals and wine. Exquisite French salads, rustic breads, great wines, all rustled up in no time at all, and perfect for the summer weather.

Every so often, overcome by the heat, we’d retire from the terrace into the house – where the walls are three feet thick – to cool off for an hour or so.

It’s an amazing place – a huge stone house, part of a small hamlet just a 15 minute walk from the campsite. The house was once owned by silk weavers, and is now divided into four dwellings. Françoise lives in the house to the rear, where the gardens fall away in tree-lined terraces to a stream. In spring the water comes tumbling down from steep, forested hills, while in summer the bed is virtually dry. Often, at night, a family of wild boar come trundling along the ditch, looking for food and water – but although we didn’t see them there, on our last night, driving back from dinner at Vezenobres, we almost met them crossing the road.

We came over a small hill, and in the dip there they were in the headlights. Emergency stop as a large pig disappeared into the forest, followed by half a dozen little ones – little legs skittering along – with another large pig bringing up the rear.  What a surprise – delightful and slightly unreal, like something out of a Disney film.

All too soon it was time to say au revoir to Françoise, and the people at La Croix Clementine. Next morning we were packing up and moving on – westwards again, through pretty Anduze, where the old steam-train runs up the Gardon river – and on across the Cevennes. En route we stopped at a small fortified village, La Couvertoirade, not far from Millau. First settled by the Templars who built the castle in the 12th C, it was later fortified by the Hospitaller Knights of St John. Now the village is home mainly to artists and craftsmen, with tiny galleries entered by low, arched doorways – more like the entrance to caves – and a few small restaurants to feed the inner traveller. The tiny chapel has a wonderful stone-vaulted roof, a simple altar, and modern stained glass in the few lancet windows. Simple and restrained, with a great sense of age and holiness, it’s definitely worth a visit.

We drove on a few more miles to Millau, famous for the Viaduc de Millau which crosses the valley of the river Tarn. We crossed it three years ago in driving rain, so didn’t see the town way below, or the spectacular views – but this time, coming down winding roads from the high plateau, we could see the bridge way in the distance. An amazing feat of engineering.

But oh my, was that day hot! Melting temperatures in the valley, yet a ferociously hot wind was blowing – like blasts from a giant oven. I found myself worrying about forest fires – and even that the great trees shading the campsite would be uprooted and crush the lot of us.

We stayed at a 3 star site, St Lambert, just over 2 km from the centre of Millau, on the River Dourbie. They hadn’t had rain for a couple of months, so the pitches were dry and sandy. But that Friday night it was surprisingly quiet. No one was camped near us. Good on two counts – no noise, and no men using the urinals which were in plain sight!!! (Thankfully the other facilities were more modern!) 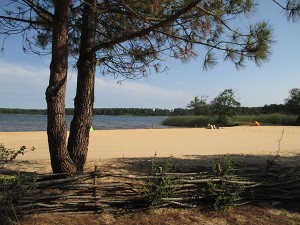 Most campers were in tents by the river. Great for paddling, but we fancied a swim and headed for the pool. For years I’ve carried the swimsuits around, but can’t recall the last time I went swimming. But this time I couldn’t resist. It was fabulous – stayed in the water for at least half an hour while it cooled the body temperature right down. After that we were able to think about eating. Grilled prawns and fried calamari with a lovely salad, courtesy of the restaurant. As the winds died away we turned on the air-conditioning to cool the van down. Must be the second time we’ve used it in 15 years – it worked well and ensured a good night’s sleep.

Next morning we were moving on through another powerfully hot day to Villeneuve-sur-Lot, and the Camp Municipal du Rooy – situated just away from the river. Like Avignon, the sanitaires were clean but in need of updating, but it did have ponds, complete with ducks, swans and croaking frogs – which made for an interesting evening chorus.