Days before Christmas, we were leaving our modern house in Otley and moving to a new home just outside York.

Alone after the removal van went, I said goodbye to friends and neighbours who had come to wish us well. Climbing into the Volvo, I drove through rush hour traffic, shedding a few tears on the quieter country roads. Exhausted and missing my husband, 500 miles away in Shetland, I felt very sorry for myself. If this new job hadn’t come up, he would have been here, his strength and energy making short work of difficult jobs, his very presence providing comfort and support. But Peter was riding every available ship in and out of the oil terminal at Sullom Voe, and it was impossible to predict when he would be working or sleeping. So I couldn’t even phone him to share my woes.

On the Vale of York there was a covering of snow, fields white beneath a clear dark sky. I heard on the radio that the temperatures that night were expected to hit a new low with 15 degrees of frost, but insulated by warm air pouring from the Volvo’s heater, it barely registered. Traffic on the York ring road was heavy, but at last I turned down the lane to our new house and, a mile further on, pulled into the drive. 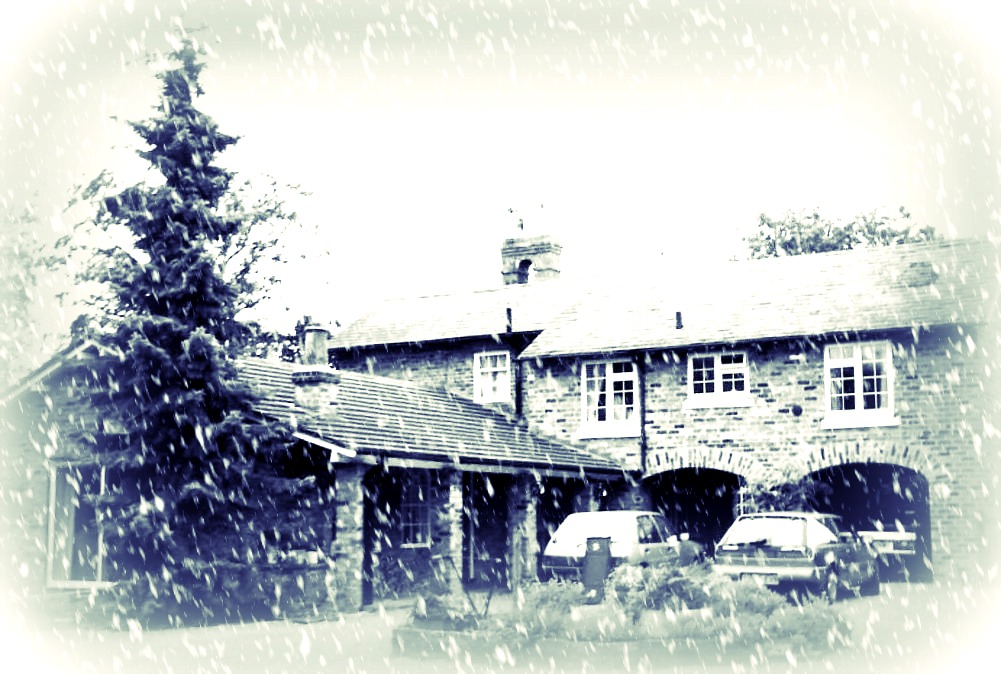 My daughter Louise had switched on the outside light, an old-fashioned street lamp that lit the frosted trees like a Christmas card. Here at last was the new home, and my spirits lifted as lawns and paddock came sparkling into the headlights, gravel hard beneath my feet as I stepped out of the car.

The cold hit me with a shock. Louise, still in her padded jacket, rushed out to hug me, taking me to see her little mare, all rugged up and cosy in her new stable, munching happily on hay. Indoors, our two cats were huddled in their baskets. The empty rooms were freezing.

‘Why didn’t you turn the heating up?’ I asked, shivering, but Louise had been reluctant to fiddle with the control system. I looked at it, but despite the instructions, my tired brain refused to comprehend. In the dining room, there was a grate with logs set in decorative fashion, but no kindling. Never much good at lighting fires, I felt worse than inadequate. Peter could have done it – and mastered the mysteries of the heating system within minutes. If I’d missed him beforehand, at that point I could have cheerfully killed him.

With the arrival of the removal van we unpacked enough to survive the night. Having fed the cats, Louise and I hugged mugs of soup while gazing from the window at the old-fashioned street lamp on the drive.

Surrounded by frosted trees, it was so exactly that wonderful scene in The Lion, the Witch and the Wardrobe, where Lucy pushes the fur coats aside to enter the magical land of Narnia, we almost expected Mr Tumnus to come hopping through the snow. Enchanted, Louise reminded me of the first time we’d read that book, in dark, torrential rain off the Virgin Islands, waiting for a Caribbean hurricane to pass. Scott was bored with games, she said; he’d wanted a story, so we looked in the ship’s library, and found this tattered old paperback.

‘Must have been one of the first editions,’ I said, ‘judging by the cover.’

‘I started reading aloud – and Scott just sat there – he was mesmerised!’

‘And we finished the book in one day! Wasn’t it a wonderful story? And now,’ she whispered, ‘just look – we’ve got our own lamp-post, our own trees, and snow…’

Warmed by those memories, and cheered by my daughter’s happiness, I felt fatigue slip away. Suddenly, the chilly expanse of empty rooms seemed equally magical, just waiting for us to fill them with our lives. I had my own special book which would be finished here, and a new one to begin; Louise had a whole new life to look forward to, unmapped as yet, but good things would come, we were sure of that.

It must have been the coldest night of the decade. Upstairs there were no curtains and no double-glazing. If it was 15° below freezing outside, it seemed equally cold within. In bed, I couldn’t get warm. Head, hands and feet were frozen – Narnia must have been like this, I decided, under the regime of the White Witch. Poor Mr Tumnus. Then I began to think of Mr Scrooge, going to bed in his nightcap, and drawing the curtains of his four-poster around him. I longed for a woolly hat and gloves, for socks to warm my icy feet. My duvet – perfectly adequate in our old house – was no more effective than a thin blanket. I hated to get out again, but forced myself to go in search of the box containing extra bedding.

Louise called from her room. Like me, she was shivering and had donned socks and jeans and sweater over her nightshirt. Envying the socks – and the two cats curled up on her bed – I gave her some blankets and retired to my room with Scott’s duvet. At last we slept, waking to lukewarm radiators, and a glorious winter sunrise through mist over the fields. Wonderfully, magically beautiful, it lit a spark of joy that never faded.

Nevertheless, with lots to do, I was glad there’d been no more snow.

Half our furniture had gone with Peter to Shetland, and the remainder looked a little sparse. I arranged the rocking chair and Grandma’s old sofa in front of the fireplace – all we needed now was a fire and some heat.

A phone call from Peter brought us closer to that end. He took me through the instructions, and finally I found the concealed knob that controlled the boiler function. With the timer on constant, we managed to raise the temperature enough to be comfortable. Having ordered logs and coal, and collected dry twigs from the orchard for kindling, Louise and I learned how to light a fire.

Scott arrived home next day, but we weren’t expecting Peter. He’d said his training as a marine pilot would continue over Christmas, so I was astonished when he rang to say that things had changed and he’d be with us two days hence. Delight was almost overcome by panic, but it gave the necessary boost. At once, the kids and I flung ourselves into action.

How wonderful, they said, to have all the family together in our new home – and with Dad’s new job, and my book being accepted by a London publisher, we had so much to celebrate. Between us we emptied the important boxes, hung a pleasing set of pictures up the staircase – prints, paintings and the old sepia photographs which had been such an inspiration for my novel.

Louise arranged china on the dresser and found some old candlesticks for the mantelpiece, while Scott polished Grandma’s brass companion set for the hearth. Against a deep red Turkey carpet and maroon velvet curtains at the windows, everything looked delightfully cosy. We bought a tree from the garden centre next door, and trimmed it with lights and baubles. When we’d finished the house looked like an old-fashioned Christmas card, set off by the staircase and the tall Georgian window, framing a view of frosted trees and the old street lamp outside…

Was the regime of the White Witch banished forever? With my husband’s homecoming could we relax and get the bubbly out – or did the snowy sleigh-ride ride still have some way to run…?